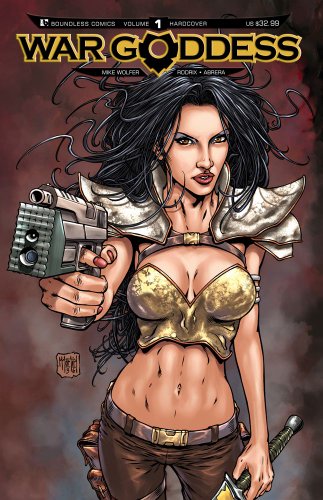 Femme fatales Pandora and Widow go to war against an army of monsters, led by the beautiful and deadly Hellina. Explosive action, bloody gore, and sexy bad girls!

For centuries, the sins of man ravaged the Earth, and only the immortal Pandora, the very woman whose curiosity first unleashed that evil, could protect humanity. After innumerable ages, she had finally completed her mission and settled into a life of leisure. However, the mantle of War Goddess cannot be so easily set aside. When a freak accident of science unlocks the doors to endless dimensions, all-new evils spill out into the world, and Pandora charges again into combat. But to defeat the deadly Hellina and the malevolent legions that follow in her wake, the immortal heroine must assemble a supernatural line of defense... including the woman/spider hybrid Widow, whose savagery and thirst for blood might be the deciding factor between victory and Hell on Earth.

With a career spanning over twenty years, Mike Wolfer has been both writer and illustrator on many of Avatar Press' most popular titles, collaborating with some of the industry's most renowned writers including Warren Ellis, Garth Ennis, and Alan Moore. As the guiding force behind such horror titles as Night of the Living Dead, Friday the 13th, and Escape of the Living Dead, Wolfer cemented his reputation as one of today's top creators of supernatural tales, a trend has continues with his writing credits on Warren Ellis' Gravel and Garth Ennis' Stitched, both of which he also illustrates. Avatar's sister company, Boundless Comics, has also benefited from Wolfer's flair for the macabre, as he writes both Brian Pulido's Lady Death and the "bad girl" extravaganza title, War Goddess.