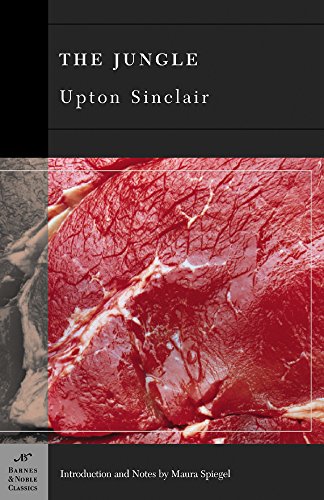 The Jungle, by Upton Sinclair, is part of the Barnes & Noble Classics series, which offers quality editions at affordable prices to the student and the general reader, including new scholarship, thoughtful design, and pages of carefully crafted extras. Here are some of the remarkable features of Barnes & Noble Classics:

All editions are beautifully designed and are printed to superior specifications; some include illustrations of historical interest. Barnes & Noble Classics pulls together a constellation of influences biographical, historical, and literary to enrich each reader's understanding of these enduring works. Upton Sinclair’s muckraking masterpiece The Jungle centers on Jurgis Rudkus, a Lithuanian immigrant working in Chicago’s infamous Packingtown. Instead of finding the American Dream, Rudkus and his family inhabit a brutal, soul-crushing urban jungle dominated by greedy bosses, pitiless con-men, and corrupt politicians.

While Sinclair’s main target was the industry’s appalling labor conditions, the reading public was most outraged by the disgusting filth and contamination in American food that his novel exposed. As a result, President Theodore Roosevelt demanded an official investigation, which quickly led to the passage of the Pure Food and Drug laws. For a work of fiction to have such an impact outside its literary context is extremely rare. (At the time of The Jungle’s publication in 1906, the only novel to have led to social change on a similar scale in America was Uncle Tom’s Cabin.)

Today, The Jungle remains a relevant portrait of capitalism at its worst and an impassioned account of the human spirit facing nearly insurmountable challenges.

Maura Spiegel teaches literature and film at Columbia University and Barnard College. She is the coauthor of The Grim Reader and The Breast Book: An Intimate and Curious History. She coedits Literature and Medicine, a journal.

During his lifetime, Upton Sinclair authored dozens of books dealing with political and social questions, The Coal War and Oil! being two representative examples. Sinclair was also a socialist and political activist almost his entire adult life. After being massively outspent by business interests he narrowly missed being elected governor of California in 1936. The Jungle, written while he was still in his 20s, is by far his best known book.

An ardent activist, champion of political reform, novelist, and progressive journalist, Upton Sinclair is perhaps best known today for The Jungle his devastating expose of the meat-packing industry. A protest novel he privately published in 1906, the book was a shocking revelation of intolerable labor practices and unsanitary working conditions in the Chicago stockyards. It quickly became a bestseller, arousing public sentiment and resulting in such federal legislation as the Pure Food and Drug Act.-The brutally grim story of a Slavic family who emigrates to America, The Jungle tells of their rapid and inexorable descent into numbing poverty, moral degradation, and social and economic despair. Vulnerable and isolated, the family of Jurgis Rudkus struggles unsuccessfully to survive in an urban jungle.
A powerful view of turn-of-the-century poverty, graft, and corruption, this fiercely realistic American classic is still required reading in many history and literature classes. It will continue to haunt readers long after they've finished the last page."