Items related to Tess of the d'Urbervilles, Introduction and notes...

Hardy, Thomas Tess of the d'Urbervilles, Introduction and notes by David Galef

Tess of the d'Urbervilles, Introduction and notes by David Galef 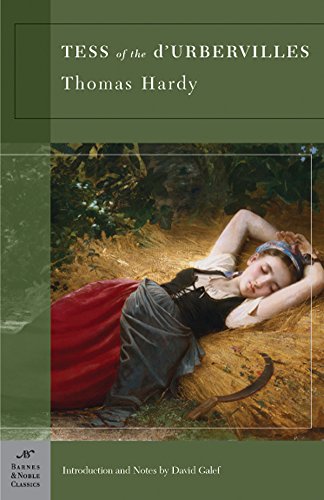 &&LDIV&&R&&LDIV&&R&&LI&&RTess of the d'Urbervilles&&L/I&&R, by &&LB&&RThomas Hardy&&L/B&&R, is part of the &&LI&&RBarnes & Noble Classics&&L/I&&R&&LI&&R &&L/I&&Rseries, which offers quality editions at affordable prices to the student and the general reader, including new scholarship, thoughtful design, and pages of carefully crafted extras. Here are some of the remarkable features of &&LI&&RBarnes & Noble Classics&&L/I&&R: &&LDIV&&R

All editions are beautifully designed and are printed to superior specifications; some include illustrations of historical interest. &&LI&&RBarnes & Noble Classics &&L/I&&Rpulls together a constellation of influences―biographical, historical, and literary―to enrich each reader's understanding of these enduring works.&&L/DIV&&R&&L/DIV&&R&&LP style="MARGIN: 0in 0in 0pt"&&R &&L/P&&R&&LP style="MARGIN: 0in 0in 0pt"&&RHighly controversial because of its frank look at the sexual hypocrisy of Victorian society, &&LB&&RThomas Hardy&&L/B&&R’s &&LI&&RTess of the D’Urbervilles&&L/I&&R was nonetheless a great commercial success when it appeared in 1891. It is now considered one of the finest novels in English.&&LBR&&R&&LBR&&RUsing richly poetic language to frame a shattering narrative of love, seduction, betrayal, and murder, Hardy tells the story of Tess Durbeyfield, a beautiful young woman living with her impoverished family in Wessex, the southwestern English county immortalized by Hardy. After the family learns of their connection to the wealthy d’Urbervilles, they send Tess to claim a portion of their fortune. She meets and is seduced by the dissolute Alec d’Urberville and secretly bears a child, Sorrow, who dies in infancy. A very different man, Angel Clare, seems to offer Tess love and salvation, but he rejects her―on their wedding night―after learning of her past. Emotionally bereft, financially impoverished, and victimized by the self-righteous rigidity of English social morality, Tess escapes from her vise of passion through a horrible, desperate act.&&LBR&&R&&LBR&&RWith its compassionate portrait of a young rural woman, powerful criticism of social convention, and disarming consideration of the role of destiny in human life, &&LI&&RTess of the D’Urbervilles&&L/I&&R is one of the most moving and memorable of Hardy’s novels.&&LBR&&R&&L/P&&R&&LP style="MARGIN: 0in 0in 0pt"&&R&&LSTRONG&&RDavid Galef&&L/B&&R&&L/B&&R has published nine books: the novels &&LI&&RFlesh&&L/I&&R and &&LI&&RTurning Japanese;&&L/I&&R two children's books, &&LI&&RThe Little Red Bicycle&&L/I&&R and&&LI&&R Tracks;&&L/I&&R two translations of Japanese proverbs, &&LI&&REven Monkeys Fall from Trees&&L/I&&R and &&LI&&REven a Stone Buddha Can Talk;&&L/I&&R a work of literary criticism, &&LI&&RThe Supporting Cast;&&L/I&&R an edited anthology of essays called &&LI&&RSecond Thoughts: A Focus on Rereading;&&L/I&&R and, most recently, the short-story collection &&LI&&RLaugh Track.&&L/I&&R In addition, he has written more than seventy short stories for magazines ranging from the British &&LI&&RPunch&&L/I&&R to the Czech &&LI&&RPrague Revue,&&L/I&&R the Canadian &&LI&&RPrism International,&&L/I&&R and the American &&LI&&RShenandoah.&&L/I&&R His essays and reviews have appeared in the &&LI&&RNew York Times, Newsday,&&L/I&&R the &&LI&&RVillage Voice, Twentieth Century Literature, The Columbia History of the British Novel,&&L/I&&R and many other places. He is a professor of English at the University of Mississippi, where he also administers the M.F.A. program in creative writing. &&L/P&&R&&L/DIV&&R

Cambridge Literature is a series of literary texts edited for study by students aged 14-18 in English-speaking classrooms. It will include novels, poetry, plays, short stories, essays, travel-writing and other non-fiction. Tess of the d'Urbervilles by Thomas Hardy is edited by Rex Gibson, Director, Shakespeare and Schools Project.

1. Tess of the D'Urbervilles (Paperback)

Book Description Paperback. Condition: New. Paperback. "Tess of the d'Urbervilles," by Thomas Hardy, is part of the "Barnes & Noble Classics" "series, which offers quality editions at affordable prices t.Shipping may be from multiple locations in the US or from the UK, depending on stock availability. 506 pages. 0.435. Seller Inventory # 9781593082284

2. Tess of the d'Urbervilles, Introduction and notes by David Galef

3. Tess of the d'Urbervilles, Introduction and notes by David Galef

4. Tess of the D'urbervilles

5. TESS OF THE D'URBERVILLES, INTR

6. TESS OF THE D'URBERVILLES, INTR