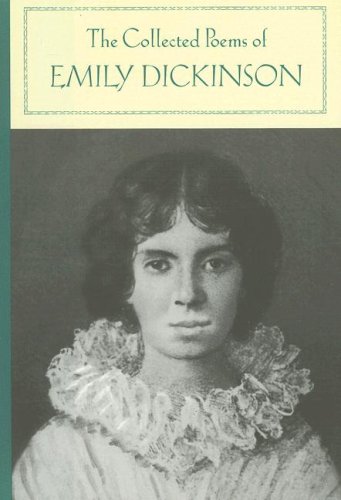 The Collected Poems of Emily Dickinson, by Emily Dickinson, is part of the Barnes & Noble Classics series, which offers quality editions at affordable prices to the student and the general reader, including new scholarship, thoughtful design, and pages of carefully crafted extras. Here are some of the remarkable features of Barnes & Noble Classics:

All editions are beautifully designed and are printed to superior specifications; some include illustrations of historical interest. Barnes & Noble Classics pulls together a constellation of influences biographical, historical, and literary to enrich each reader's understanding of these enduring works. Born in Amherst, Massachusetts in 1830, Dickinson began life as an energetic, outgoing young woman who excelled as a student. However, in her mid-twenties she began to grow reclusive, and eventually she rarely descended from her room in her father’s house. She spent most of her time working on her poetry, largely without encouragement or real interest from her family and peers, and died at age fifty-five. Only a handful of her 1,775 poems had been published during her lifetime. When her poems finally appeared after her death, readers immediately recognized an artist whose immense depth and stylistic complexities would one day make her the most widely recognized female poet to write in the English language.

Dickinson’s poetry is remarkable for its tightly controlled emotional and intellectual energy. The longest poem covers less than two pages. Yet in theme and tone her writing reaches for the sublime as it charts the landscape of the human soul. A true innovator, Dickinson experimented freely with conventional rhythm and meter, and often used dashes, off rhymes, and unusual metaphors techniques that strongly influenced modern poetry. Dickinson’s idiosyncratic style, along with her deep resonance of thought and her observations about life and death, love and nature, and solitude and society, have firmly established her as one of America’s true poetic geniuses.

Includes an index of first lines.

Emily Dickinson was a prolific writer and yet, with the exception of four poems in a limited regional volume, her poems were never published during her lifetime. It was indeed fortunate that her sister discovered the poems—all loosely bound in bundles—shortly after Dickinson died.
Collected Poems of Emily Dickinson is the complete collection of the first three volumes of poetry published posthumously in 1890, 1891, and 1896 by editors Mary Loomis Todd and Thomas Wentworth Higginson. The volumes were all received with high acclaim and contain some of her best-known poems. It was in the twentieth century, however, that Dickinson was finally recognized as one of the great poets and, without dispute, the most popular.
The name Emily Dickinson is a legend now, but she never had the opportunity to taste the wine of success and fame in her lifetime. In fact, if there was any legendary status she received in her life, it was not for poetry but for the way she lived her life. She received local notoriety in her native town of Amherst, Massachusetts, as an eccentric recluse who, with few exceptions, would never set foot outside her house. Yet, as her poetry will attest, she had a keen insight of life, love, nature, and death and seemed to be content with her station in life.
Reading through the poems in Collected Poems of Emily Dickinson, you will see that she was indeed a woman of independence and spirit, a poet that lives today in our hearts and minds.

Emily Dickinson, writing to the editor Thomas Wentworth Higginson in July 1862, reported that she had no portrait,” but offered the following description in place of one: Small, like the Wren, and my Hair is bold, like the Chestnut Bur and my eyes, like the Sherry in the Glass, that the Guest leaves Would this do just as well?” (Selected Letters, edited by Thomas H. Johnson, p. 175; see For Further Reading”). Despite Dickinson’s claim, we do possess one photograph of her a daguerreotype taken in 1847 or 1848, when she was in her late teens. The image certainly confirms her self-portrait: Her frame is tiny; her shiny hair does indeed sit boldly atop her head; and her dark eyes really do glisten like liquor at the bottom of a glass.

The photograph also suggests many of the rich puzzles and paradoxes that have informed our view of Dickinson since the last decade of the nineteenth century, when readers and critics began to read, study, and obsess over her poems. Dickinson’s body, with its delicate hands and slender torso, may resemble the fragile form of someone too weak to venture far from home; but her huge moist eyes stare at us with the wisdom, depth, and longing of a woman who has traveled around the world and come back with stories, not all of them fit for mixed company. She demurely clutches a bouquet of flowers, and a book rests primly at her side; but her full, sensuous lips reveal a person whose thoughts may not always tend toward such tidy subjects as flowers and books. We look away from the photograph intrigued and stirred: What’s going on in her mind? How could this slight figure be the author of some of the most passionate love poems, the most searing descriptions of loss, the most haunting religious lyrics ever written?

Emily Elizabeth Dickinson was born in Amherst, Massachusetts, on December 10, 1830, the middle child of Edward and Emily Norcross Dickinson; her brother, Austin, was born in 1829 and her sister, Lavinia, in 1833. Her father, a lawyer, served as treasurer of Amherst College (her grandfather was a co-founder of the college), and also occupied important positions on the General Court of Massachusetts, the Massachusetts State Senate, and the United States House of Representatives. His Heart,” Dickinson wrote in a letter, was pure and terrible and I think no other like it exists” (Letters, p. 223). He was strictly religious (something she would later rebel against), leading the family prayers every day and often censoring her reading; but he also ensured that Dickinson grew up in a household surrounded by books and heated intellectual debates. Her mother was a more shadowy presence; Dickinson wrote that she does not care for thought” (Letters, p. 173); more harshly, she claimed, I never had a mother. I suppose a mother is one to whom you hurry when you are troubled” (Letters, vol. 2, p. 475). Even so, the Dickinsons remained an extremely close-knit family; after her brother, Austin, married, he and his wife settled right next door.

Dickinson attended the coeducational Amherst Academy from the ages of ten to seventeen, and then went on to the Mount Holyoke Female Seminary (now Mount Holyoke College) in nearby South Hadley. She blossomed there into a social and spirited young woman. The most significant event of her stay occurred at a fundamentalist Calvinist revival meeting, when she was asked to stand and declare herself a Christian and refused. After one year at Mount Holyoke she returned in 1948 to Amherst, where she remained, apart from brief trips to Boston, Cambridge, Philadelphia, and Washington, D.C., for the rest of her life.

At school and at home, Dickinson received an excellent education. At the Amherst Academy alone she studied the arts, English literature, rhetoric, philosophy, Latin, French, German, history, geography, classics, and the Bible; she also received a firm grounding in the sciences, mathematics, geology, botany, natural history, physiology, and astronomy. At home the Dickinsons’ large and varied library included books by Hawthorne, Emerson, Thoreau, Longfellow, Shakespeare, Keats, the Brownings, the Brontës, and George Eliot, along with Noah Webster’s An American Dictionary of the English Language which for Dickinson would prove one of the most important books of all and a healthy dose of newspapers and romance novels.

During her early twenties, Dickinson began to dress in white, to leave her house only on rare occasions, and to restrict the circle of her acquaintances until it numbered just a few people. Often speaking to visitors through a screen or from an adjoining room, she soon developed a reputation as a town eccentric. The young Mabel Loomis Todd, having recently moved to Amherst with her husband, David, remarked in a letter to her parents about a strange resident:

I must tell you about the character of Amherst. It is a lady whom all the people call the Myth. She is a sister of Mr. Dickinson, & seems to be the climax of all the family oddity. She has not been outside her house in fifteen years, except once to see a new church, when she crept out at night, & viewed it by moonlight. No one who calls upon her mother & sister ever sees her, but she allows little children once in a great while, & one at a time, to come in, when she gives them cake or candy, or some nicety, for she is very fond of little ones. But more often she lets down the sweetmeat by a string, out of a window, to them. She dresses wholly in white, & her mind is said to be perfectly wonderful. She writes finely, but no one ever sees her. Her sister . . . invited me to come & sing to her mother sometime. . . . People tell me the myth will hear every note she will be near, but unseen. . . . Isn’t that like a book? So interesting (Farr, Emily Dickinson: A Collection of Critical Essays, p. 20).

One can hardly blame Todd for being fascinated by such an unusual character.” But unfortunately, the myth” she takes such pleasure in describing influenced our later notions of Dickinson much too heavily. Despite her seclusion, a large number of prominent figures came and went through her house. She also developed deep, though largely epistolary, friendships with several people: the clergyman Charles Wadsworth, whom she met in Philadelphia and described as her dearest earthly friend”; Samuel Bowles, editor of the Springfield Republican; and Judge Otis Phillips Lord of Salem, Massachusetts.