Items related to The Darwin Conspiracy 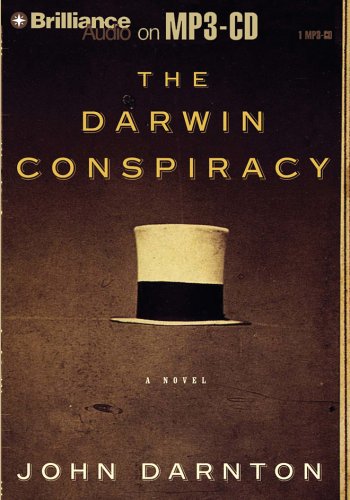 In this riveting new novel, bestselling author John Darnton transports us to Victorian England and around the world to reveal the secrets of a legendary nineteenth-century figure. Darnton elegantly blends the power of fact and the insights of fiction to explore the many mysteries attached to the life and work of Charles Darwin.

What led Darwin to the theory of evolution? Why did he wait twenty-two years to write On the Origin of Species? Why was he incapacitated by mysterious illnesses and frightened of travel? Who was his secret rival?

These are some of the questions driving Darnton’s richly dramatic narrative, which unfolds through three vivid points of view: Darwin’s own as he sails around the world aboard the Beagle; his daughter Lizzie’s as she strives to understand the guilt and fear that struck her father at the height of his fame; and that of present-day anthropologist Hugh Kellem and Darwin scholar Beth Dulcimer, whose obsession with Darwin (and with each other) drives them beyond the accepted boundaries of scholarly research.

What Hugh and Beth discover—Lizzie’s diaries and letters lead them to a hidden chapter of Darwin’s autobiography—is a maze of bitter rivalries, petty deceptions, and jealously guarded secrets, at the heart of which lies the birth of the theory of evolution.

John Darnton has worked for forty years as a reporter, editor, and foreign correspondent for The New York Times. He was awarded two George Polk Awards for his coverage of Africa and Eastern Europe, and the Pulitzer Prize for his stories that were smuggled out of Poland during the period of martial law. He is a best-selling author whose previous novels include Neanderthal and The Darwin Conspiracy. He lives in New York.

Hugh spotted the boat while it was still a dot on the horizon and watched it approach the island, making a wide, white arc. He shaded his eyes but still he had to squint against the shards of reflected light. Already the morning sun had cut through the haze to lay a shimmering sword on the water.

All around him the birds swooped and darted in the cacophonous morning feeding—hundreds of them, screaming swallow-tailed gulls, brown noddies, boobies homing in with fish dangling in their beaks. A frigate circled behind a gull, yanked its tail feathers to open the gullet, then made a corkscrew dive to grab the catch—a flash of acrobatic violence that had long since ceased to amaze him.

The boat appeared to be a panga, but that was odd: supplies weren’t due for days. Hugh fixed his stare on the dark silhouette of the driver. He looked like Raoul, the way he leaned into the wind, one arm trailing back on the throttle.

Hugh dropped his canvas tool bag near the mist net and started down. The black rocks were streaked white and gray with guano, which stank in the windless air and made the lava slippery, but he knew the footholds perfectly. The heat pressed down on him.

When he reached the bottom of the cliffside, Raoul was already there. He idled the swaying panga a few feet from the landing rock, a narrow ledge that was washed by an ankle-deep wave every few seconds.

“Hey, Cowboy,” said Hugh. He coughed to clear his throat—it had been a long time since he had talked to anybody.

Raoul was wearing pressed khaki shorts, a Yankees cap over his thick black hair at a jaunty angle, and a dark blue jersey with the insignia of the Galapagos National Park on the left breast pocket.

“I thought you will be totally crazy by now.” His English was almost perfect but sometimes an odd phrasing gave him away.

“Ermitano,” Raoul repeated. “How do you say that?”

Raoul nodded and regarded him closely. “So, how’re you doing?”

“I brought two chimbuzos.” He gestured with his chin to two water barrels strapped to the mid-seat. “Help me to deliver them.”

Hugh leapt into the boat, unstrapped a barrel, and hoisted it over his right shoulder. The weight threw off his balance and he tottered like a drunken sailor and almost fell into the water.

“Not like that,” said Raoul. “Put them overboard and shove them to the mat. Then you climb up and pick them up.”

The mat, short for “welcome mat,” was the nickname the researchers called the rocky ledge. Raoul had hung around them so long, help- ing out now and then because he admired what they were doing, that he was picking up their lingo.

Hugh finally got both barrels ashore and lugged them up to the beginning of the path. He was dripping with sweat by the time he returned.

“Want to come on shore, stay a while?” he asked. The offer was disingenuous. The water was too deep to anchor—more than eighty feet straight down—and if the panga docked, the waves would smash it against the rocks.

“I can’t stay. I just wanted to say hello. How’re your crazy birds— getting thirsty, no?”

“The heat’s rough on them. Some are dying.”

Raoul shook his head. “How many days without rain?” he asked.

Raoul whistled and shook his head again, a fatalistic gesture, and lit a cigarette.

They talked for a while about the study. Raoul was always eager to hear how it was going. He had once said that if he came back to earth a second time that was what he wanted to do—camp out and study birds. Hugh thought that Raoul had no idea what it was really like—the solitude, the fatigue and boredom and endless repetition of extremes, boiling during the day and then at night when the temperature dropped forty degrees, lying in your sleeping bag and shivering so violently you can’t go to sleep even though you’re exhausted. Anything can sound glamorous until you do it.

“Sat phone,” explained Hugh. “Satellite. I got a call day before yesterday. The thing scared the shit out of me when it rang.”

“No, I don’t think so. I don’t know anybody in the project, really.”

“What are their names?”

Raoul paused a moment, then looked at him closely. “Hombre, you okay? You don’t look so good.”

“All that pink skin.”

That was a joke. Hugh had been burned and tanned so many times that his skin had turned a leathery brown. His lips were swollen and cracked, despite the Chap Stick, and his eyebrows were bleached blond.

“You think you ready to share this paradise with other people?”

“Sure thing,” said Hugh, but his voice sounded uncertain.

Raoul turned and looked out to sea. Far away the dark profile of a ship could be seen moving quickly with a funnel of gulls circling it.

“The Neptune,” he said. “More tourists for the Enchanted Isles.”

“Whoever thought that one up deserves a medal,” said Hugh. He could see by the shadow that crossed Raoul’s face that the remark was hurtful. The depth of Equadorean nationalism always amazed him. He smiled, pretending he was joking.

“More work for me.” Raoul shrugged. “Well, tengo que trabajar.” He flicked his cigarette way off into the water and gave a little wave from the hip. “Ciao.”

“Ciao. Thanks for the water.”

“Don’t drink it all right now.” Raoul grinned as he turned the panga, gunned the motor, and pulled out so fast the bow rose up like a surfboard. Hugh stared after him until the boat disappeared behind the island.

He carried the chimbuzos one at a time up the long path that wound up the south face of the volcano and then down past the campsite into the bottom of the crater, where in theory it was a degree or two cooler—but only in theory. On hot days, even here, he had seen the green-footed boobies shifting from one webbed foot to the other on the scorching rocks.

He looked at his watch. Shit. Almost seven o’clock. He had forgotten about the mist net—he was sure he had seen a bird trapped there, maybe two. He had to hurry and free them before they died in the quickening morning heat. Once, months ago, before he got the routine down, he had lost a bird that way. They were surprisingly resilient if you handled them right, but if you made a mistake, like leaving them trapped in the mist net too long, they were as fragile as twigs. That time, he had recorded the death dutifully in the log, without explanation, in a single concocted word: “ornithocide.”

At the top of the island it was even hotter. He grabbed his bag and looked at the net. Sure enough, there were two birds, small dark cocoons that rippled as he touched them. He reached in and held one to his chest while he deftly lifted off the black threads so thin they caught the birds in flight. As he untangled the mesh from the feathers he suddenly had a memory: playing badminton as a young boy during long summer evenings, those moments when the plastic bird hurled into the net and had to be carefully extracted.

He now saw the finch’s color, black mottled with gray and dusty white. A cactus finch—Geospiza scandens—very common, no surprise there. He held it tightly in his left fist and raised it to look at it. The eyes, deep brown, looked back, and he could feel the tiny heart tickling his palm. He checked the bands—a green and black one on the left leg and a blue one on the right—and identified him in the register. Number ACU-906. A previous researcher had jotted down a nickname, Smooches, in a rounded, girlish American script.

After all this time Hugh still had trouble identifying more than a dozen finches by their nicknames, the ones that hung around the campsite. Spotting them was a point of pride with the researchers, he gathered; they told stories of sitting around the rocks and rattling off the names of thirty or forty at a shot. “You’ll get to know them in no time,” he had been told at the farewell pep talk by Peter Simons, a legend in the field. “Just stretch out your arm and they’ll land on it.” That part was true at least. He was pleasantly surprised the first week when he was measuring a small finch and another came to perch on his bare knee and peer at him, its head cocking from one side to the other. At times like that they seemed curious and intelligent. But at other times—like when he forgot to cover the coffeepot and a bird...