Items related to Blood Is the Sky (Alex McKnight Series) 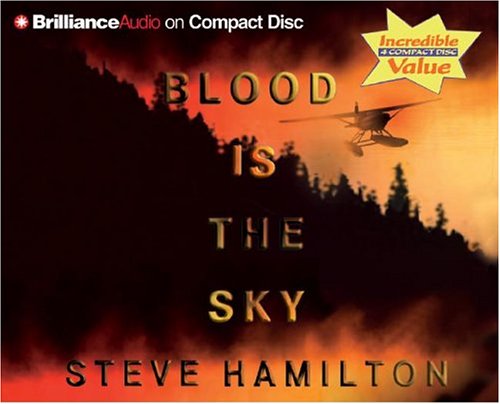 When a fire is done, what’s left is only half-destroyed. It is charred and brittle. It is obscene. There is nothing so ugly in all the world as what a fire leaves behind, covered in ashes and smoke and a smell you’ll think about every day for the rest of your life. Reluctant investigator Alex McKnight finds himself drawn by friendship into a long drive north. The brother of Alex’s longtime Ojibwa friend Vinnie LeBlanc works as a hunting guide, serving the rich clients from downstate. It seems that Vinnie’s brother and his most recent group of hunters have vanished in northern Ontario, and Vinnie is scared enough to ask Alex to help him find them. Their arrival sets in motion a heart-pounding string of events that leaves Alex and his friend miles from civilization, stranded in the heart of the Canadian wilderness with no food, no weapons -and no way out. And there’s someone out there who definitely does not want them to make it back alive. At once elegant and enormously suspenseful, Steve Hamilton’s Blood Is the Sky heralds his arrival as one of the premier crime writers working today.

One of the most promising secondary figures in Steve Hamilton's series about reluctant northern Michigan PI Alex McKnight has always been his teetotaling Ojibwa Indian pal, Vinnie LeBlanc. But Vinnie remained mostly to himself through the first four McKnight adventures. Blood Is the Sky finally lets him loose, and it's both a pleasure and painful to see what results.

Vinnie's younger, ex-con brother, Tom, has disappeared. In violation of his parole, Tom had guided a small contingent of moose hunters into the pacific forests of Ontario, but none of them had returned home on schedule. To assuage Vinnie's worries, McKnight agrees to drive with him into Canada and look for the men. No luck; the owners of a money-losing lakeside lodge where those sportsmen had stayed say they departed days ago. So where did they go? Who were the two other, unidentified guys who came looking for them in advance of McKnight and his friend? And why was the hunters' vehicle abandoned, with their wallets inside, near an Indian reservation? Looking for answers, the detective and Vinnie set off into the woods, where hungry bears are by no means the most dangerous creatures they'll have to face.

Despite its Deliverance-like moments, and an explosively violent conclusion that's not sufficiently foreshadowed, Blood Is the Sky is really a gracefully composed study of character, as focused on Vinnie's strengths and failings as Hamilton's previous novel, North of Nowhere, was on the backstory of another series regular, bar owner Jackie Connery. Yet McKnight shines here, too, his self-effacing humor keeping readers amused, when they aren't amazed--again--by the lengths to which this supposedly lonerish sleuth will go to help a friend in trouble. --J. Kingston Pierce

Advance Praise for Blood Is the Sky

“The best mysteries are about the past coming up out of the ground and grabbing the present by the throat. Steve Hamilton knows this. Blood Is the Sky fills that bill and then some. This is his best yet.”
---Michael Connelly, author of Chasing the Dime

“Easily Steve Hamilton’s best novel so far---therefore an automatic book of the year. Everything is here---his trademark sense of place, vivid, resonant characters, and a plot that will break your heart.”
---Lee Child, author of Persuader

“Blood Is the Sky takes us into the dark and brooding heart of Michigan’s Upper Peninsula. It’s got everything---tension, action, surprises.”
---T. Jefferson Parker, author of Black Winter