Items related to Glossary of the Petroleum Industry: English/Spanish... 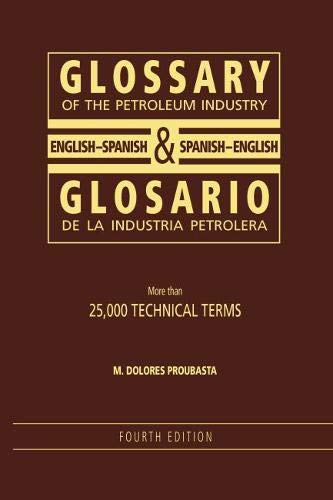 Encompassing more than 20,000 terms, the fourth edition of this best-seller is updated by 20% and draws heavily from the editorial contents of Oil & Gas Journal Latinoamerica, as a source of new technical terminology and of the local usage in different Spanish-speaking countries.  Included are many new technical and general words, phrases, and abbreviations used in oil and gas exploration, drilling, logging, completion, reservoir engineering, and production. There is a considerable increase in geologic, geophysical, commercial, computer, and legal terminology.  Ancillary fields such as electricity, navigation, construction, and ecology are also expanded.

Maria Dolores Proubasta i Ruiz is from Barcelona, Spain, where she studied journalism, worked in film production, in the medical press, and later was founder and editor of Orbe Medico. After moving to the United States, she continued humanities and English language studies, taught college Spanish, and became managing editor of Petroleo Internacional, the Latin American sister publication of Oil and Gas Journal. After a return to medical publishing in Chicago and a second two-year tour at PI, she joined The Society of Exploration Geophysicists as associate editor of The Leading Edge. She has been translating Oil & Gas Journal Latinoamerica since it was launched and has been a consultant in numerous translation and international marketing projects. She is one of the few who has written professionally in two languages. Many of her biographies of famous geophysicists and other articles have been translated to other languages.