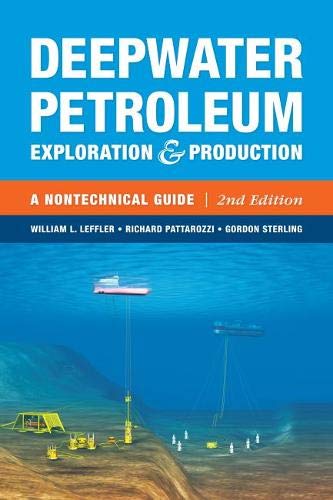 The new second edition of this authoritative book has retained all the virtues of the best-selling original, explaining the unique challenges of oil and gas exploration and production in the world's deepwater provinces. New chapters on geology and geophysics, rigs, and service vehicles are included, and the engineering and scientific schemes used in deepwater are covered in greater detail. Case studies in several chapters give practical examples, while the final chapter presents the latest technology employed in a "third wave" of industry evolution.

William L. Leffler received his BS from M.I.T. and masters and doctorate degrees in business administration from New York University. Following his career with Royal Dutch/Shell in the upstream, downstream, and petrochemicals business, he became a writer and consultant. He has authored multiple PennWell titles including the bestselling Petroleum Refining in Nontechnical Language (2000), Petrochemicals in Nontechnical Language (2001), and Deepwater Petroleum Exploration & Production: A Nontechnical Guide (2003).