Items related to The Eye of the World: Book One of 'The Wheel of...

Jordan, Robert The Eye of the World: Book One of 'The Wheel of Time'

The Eye of the World: Book One of 'The Wheel of Time' 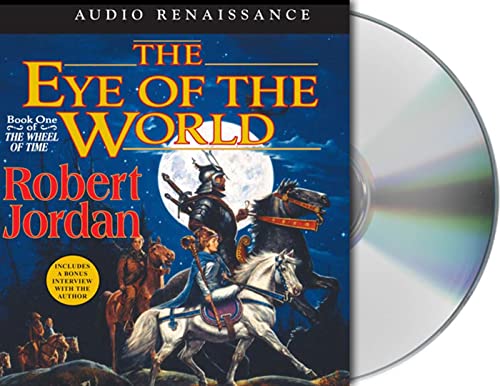 When The Two Rivers is attacked by Trollocs―a savage tribe of half-men, half-beasts― five villagers flee that night into a world they barely imagined, with new dangers waiting in the shadows and in the light.

"Jordan is able to take ... familiar elements and make them his own, in a powerful novel of wide and complex scope. Open religious and political conflicts add a gritty realism, while the cities and courts provide plenty of drama and splendor. Women have a stronger role than in Tolkien.... Each character in this large cast remains distinct.... Their adventures are varied, and exciting.... The Eye of the World stands alone as a fantasy epic."--Locus

"Robert Jordan has created a fantasy world as tangible and credible as history. He has a fine eye for detail and a vivid sense of drama."--Morgan Llewelyn

"Robert Jordan's The Eye of the World proves that there's still plenty of life in the ancient tradition of epic fantasy. Jordan has a powerful vision of good and evil-- but what strikes me as most pleasurable about The Eye of the World is all the fascinating people moving through a rich and interesting world."--Orson Scott Card

"Jordan's world is rich in detail and his plot is rich in incident. Impressive work, and highly recommended."--ALA Booklist

Kate Reading is the recipient of multiple AudioFile Earphones Awards and has been named by AudioFilemagazine as a "Voice of the Century," as well as the Best Voice in Science Fiction & Fantasy in 2008 and 2009. Her audiobook credits include reading for such authors as Jane Austen, Robert Jordan, Edith Wharton, and Sophie Kinsella. She has performed at numerous theaters in Washington D.C. and received a Helen Hayes Award for her performance in Aunt Dan and Lemon.

Michael Kramer has narrated over 100 audiobooks for many bestselling authors. He read all of Robert Jordan's epic Wheel of Time fantasy-adventure series as well as Brandon Sanderson's The Stormlight Archiveseries. He received AudioFile magazine's Earphones Award for the Kent Family series by John Jakes and for Alan Fulsom's The Day After Tomorrow. Known for his "spot-on character portraits and accents, and his resonant, well-tempered voice" (AudioFile), his work includes recording books for the Library of Congress's Talking Books program for the blind and physically handicapped.

1. The Eye of the World: Book One of 'The Wheel of Time' Jordan, Robert; Kramer, Michael and Reading, Kate