Items related to The Judgment of Paris: The Revolutionary Decade that...

King, Ross The Judgment of Paris: The Revolutionary Decade that Gave the World Impressionism

The Judgment of Paris: The Revolutionary Decade that Gave the World Impressionism 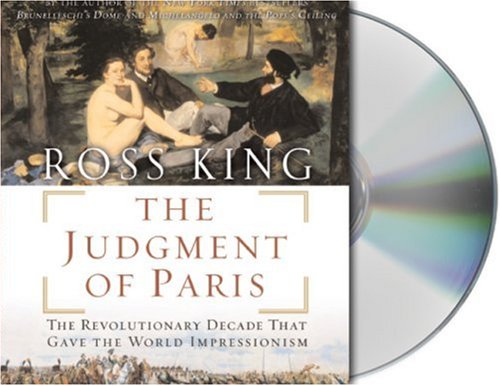 While the Civil War raged in America, another very different revolution was beginning to take shape across the Atlantic, in the studios of Paris: The artists who would make Impressionism the most popular art form in history were showing their first paintings amidst scorn and derision from the French artistic establishment. Indeed, no artistic movement has ever been, at its inception, quite so controversial. The drama of its birth, played out on canvas, would at times resemble a battlefield; and, as Ross King reveals, Impressionism would reorder both history and culture as it resonated around the world.The Judgment of Paris chronicles the dramatic decade between two famous exhibitions--the scandalous Salon des Refuses in 1863 and the first Impressionist showing in 1874--set against the rise and dramatic fall of Napoleon III and the Second Empire after the Franco-Prussian War. A tale of many artists, it revolves around the lives of two, described as "the two poles of

Born and raised in Canada, Ross King has lived in England since 1992. In 2002—03, two books of his were published in the United States, Domino, about the world of masquerades and opera in 18th century London and the New York Times bestselling Michelangelo and the Pope's Ceiling.

Nominated for a National Book Critics Circle Award in 2003 in the category of critisicm, in Michelangelo and the Pope's Ceiling King tells the story of the four years—1508-1512.—Michelangelo spent painting the ceiling of the newly restored Sistine chapel. In this extraordinary book, he presents a magnificent tapestry of day-to-day life of the ingenious Sistine scaffolding and outside in the upheaval of early 16th century Rome.

King’s highly acclaimed Brunelleschi’s Dome: How a Renaissance Genius Reinvented Architecture, was an instant hit in the U.S., landing on the New York Times, Boston Globe and San Francisco Chronicle bestseller lists and becoming a handselling favorite among booksellers. Brunelleschi’s Dome was chosen "The 2000 Book Sense Nonfiction Book of the Year" and a Book Sense 76 top ten selection.

Anyone familiar with Ross King’s writing knows that he has an astonishing knowledge of European cultural history. He originally planned a career in academia, earning his Ph.D. in English Literature and moving to England to assume a research position at the University of London.

King lives near Oxford, England, in the historic town of Woodstock, the site of Blenheim Palace. He is a devoted cyclist and hikes regularly in both the Pyrenees and the Canadian Rockies.

One gloomy January day in 1863, ­Jean-­Louis-­Ernest Meissonier, the world’s wealthiest and most celebrated paint­er, dressed himself in the costume of Napoleon Bonaparte and, despite the snowfall, climbed onto the rooftop balcony of his mansion in Poissy.

A town with a population of a little more than 3,000, Poissy lay eleven miles northwest of Paris, on the south bank of an oxbow in the River Seine and on the railway line running from the Gare ­Saint-­Lazare to the Normandy coast. It boasted a ­twelfth-­century church, an equally ancient bridge, and a weekly cattle market that supplied the butcher shops of Paris and, every Tuesday, left the medieval streets steaming with manure. There was little ­else in Poissy except for the ancient priory of ­Saint-­Louis, a walled convent that had once been home to an order of Dominican nuns. The nuns had been evicted during the French Revolution and the convent’s buildings either demolished or sold to private buyers. But inside the enclosure remained an enormous, spired church almost a hundred yards in length and, close by, a grandiose ­house with clusters of balconies, dormer windows and ­pink-­bricked chimneys: a building sometimes known as the Grande Maison.

Ernest Meissonier had occupied the Grande Maison for most of the previous two de­cades. In his ­forty-­eighth year he was short, arrogant and densely bearded: “ugly, little and mean,” one observer put it, “rather a scrap of a man.”2 A friend described him as looking like a professor of gymnastics, and indeed the burly Meissonier was an eager and accomplished athlete, often rising before dawn to rampage through the countryside on ­horse­back, swim in the Seine, or launch himself at an opponent, ­fencing ­sword in hand. Only after an hour or two of these exertions would he retire, sometimes still shod in his riding boots, to a studio in the Grande Maison where he spent ten or twelve hours each day crafting on his easel the wonders of precision and meticulousness that had made both his reputation and his fortune.

To overstate either Meissonier’s reputation or his fortune would have been difficult in the year 1863. “At no period,” a contemporary claimed, “can we point to a French paint­er to whom such high distinctions ­were awarded, whose works ­were so eagerly sought after, whose material interests ­were so guaranteed by the high prices offered for every production of his brush.” No artist in France could command Meissonier’s extravagant prices or excite so much public attention. Each year at the Paris ­Salon – the annual art exhibition in the Palais des ­Champs-Élysées – the space before Meissonier’s paintings grew so thick with spectators that a special policeman was needed to regulate the masses as they pressed forward to inspect his latest success. Collected by wealthy connoisseurs such as James de Rothschild and the Duc d’Aumale, these paintings proved such lucrative investments that Meissonier’s signature was said to be worth that of the Bank of France. “The prices of his works,” noted one awestruck art critic, “have attained formidable proportions, never before known.”

Meissonier’s success in the auction rooms was accompanied by a chorus of critical praise ­and – even more unusual for an art world riven by savage rivalries and piffling ­jealousies – the respect and admiration of his peers. “He is the incontestable master of our epoch,” declared Eugène Delacroix, who predicted to the poet Charles Baudelaire that “amongst all of us, surely it is he who is most certain to survive!” Another of Meissonier’s friends, the writer Alexandre Dumas fils, called him “the paint­er of France.” He was simply, as a newspaper breathlessly reported, “the most renowned artist of our time.”

From his vantage point at the top of his mansion this most renowned artist could have seen all that his tremendous success had bought him. A stable ­housed his eight ­horses and a coach ­house his fleet of carriages, which included expensive landaus, berlines, and victorias. He even owned the fastest vehicle on the road, a mail coach. All ­were decorated, in one of his typically lordly gestures, with a crest that bore his most fitting motto: Omnia labor, or “Everything by work.” A green­house, a saddlery, an En­glish garden, a photographic workshop, a duck pond, lodgings for his coachman and groom, and a meadow planted with cherry ­trees – all ­were ranged across a patch of land sloping down to the embankments of the Seine, where his two yachts ­were moored. A dozen miles upstream, in the Rue des Pyramides, a fashionable street within steps of both the Jardin des Tuileries and the Louvre, he maintained his Paris apartment.

The Grande Maison itself stood between the convent’s Gothic church and the remains of its ancient cloister. Meissonier had purchased the ­pink-­bricked ­eighteenth-­century orangery, which was sometimes known as Le Pavillon ­Rose, in 1846. In the ensuing years he had spent hundreds of thousands of francs on its expansion and refurbishment in order to create a splendid palace for himself and his family. A turret had been built above an adjoining cottage to ­house an enormous cistern that provided the Grande Maison with running water, which was pumped through the ­house and garden by means of a steam engine. The ­house also boasted a luxurious water closet and, to warm it in winter, a central heating system. A billiard room was available for Meissonier’s rare moments away from his easel.

Yet despite these modern con­ve­niences, the Grande Maison was really intended to be an exquisite antiquarian daydream. “My ­house and my temperament belong to another age,” Meissonier once said. He did not feel at home or at ease in the nineteenth century. He spoke unashamedly of the “good old days,” by which he meant the eighteenth century and even earlier. He detested the sight of railway stations, ­cast-­iron bridges, modern architecture and recent fashions such as frock coats and top hats. He did not like how people sat ­cross-­legged and read newspapers and cheap pamphlets instead of ­leather-­bound books. And so from the outside his ­house–all gables, pitched roofs and leaded ­windows – was a vision of ­eighteenth-­century elegance and tranquillity, while on the inside the rooms ­were decorated in the style of Louis XV, with expensive tapestries, armoires, embroidered fauteuils, and carved wooden balustrades.

The Grande Maison included not one but, most unusually, two large studios in which Meissonier could paint his masterpieces. The atelier d’hiver, or “winter workshop,” featuring bay windows and a large fireplace, was on the top floor of the ­house, while at ground level, overlooking the garden, he had built a ­glass-­roofed annex known as the atelier d’été, or “summer workshop.” Both abounded with the tools of his trade: canvases, brushes and easels, but also musical instruments, suits of armor, bridles and harnesses, plumed helmets, and an assortment of halberds, rapiers and ­muskets – enough weaponry, it was said, to equip a company of mercenaries. For Meissonier’s paintings ­were, like his ­house, recherché figments of an antiquarian imagination. He specialized in scenes from ­seventeenth- and ­eighteenth-­century life, portraying an ­ever-­growing cast of ­silk-­coated and ­lace-­ruffed ­gentlemen – what he called his bonshommes, or “goodfellows” – playing chess, smoking pipes, reading books, sitting before easels or double basses, or posing in the uniforms of musketeers or halberdiers. These musicians and bookworms striking their quiet and reflective poses in serene, softly lit interiors, all executed in microscopic detail, bore uncanny similarities to the work of Jan Vermeer, an artist whose rediscovery in the 1860s owed much to the ravenous taste for ­Meissonier – and one whose tremendous current popularity approaches the enthusiastic esteem in which Meissonier himself was held in ­mid-­nineteenth-­century France.

Typical of Meissonier’s work was one of his most recent creations, Halt at an Inn, owned by the Duc de Morny, a wealthy art collector and the illegitimate half brother of the French Emperor, Napoleon III. Completed in 1862, it featured three ­eighteenth-­century cavaliers in tricorn hats being served drinks on ­horse­back outside a ­half-­timbered rural tavern: a charming vignette of the days of old, without a railway train or top hat in sight. Meissonier’s most famous painting, though, was The Brawl, a somewhat less decorous scene depicting a fight in a tavern between two men ­dressed – as ­usual – in opulent ­eighteenth-­century attire. Awarded the Grand Medal of Honor at the Salon of 1855, it was owned by Queen Victoria, whose husband and consort, Prince Albert, had prized Meissonier above all other artists. At the height of the Crimean War, Napoleon III had purchased the work from Meissonier for 25,000 ­francs – eight times the annual salary of an average factory ­worker – and presented it as a gift to his ally across the Channel.
From the Hardcover edition.

1. The Judgment of Paris: Manet, Meissonier And the Birth of Impressionism

2. The Judgment of Paris: Manet, Meissonier And the Birth of Impressionism

3. The Judgment of Paris: The Revolutionary Decade that Gave the World Impressionism King, Ross and Layton, Tristan