Items related to Harry Potter And The Sorcerers Stone

Harry Potter And The Sorcerers Stone 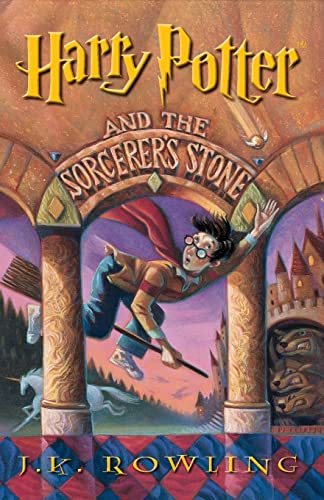 Rescued from the outrageous neglect of his aunt and uncle, a young boy with a great destiny proves his worth while attending Hogwarts School for Witchcraft and Wizardry.

Say you've spent the first 10 years of your life sleeping under the stairs of a family who loathes you. Then, in an absurd, magical twist of fate you find yourself surrounded by wizards, a caged snowy owl, a phoenix-feather wand, and jellybeans that come in every flavor, including strawberry, curry, grass, and sardine. Not only that, but you discover that you are a wizard yourself! This is exactly what happens to young Harry Potter in J.K. Rowling's enchanting, funny debut novel, Harry Potter and the Sorcerer's Stone. In the nonmagic human world--the world of "Muggles"--Harry is a nobody, treated like dirt by the aunt and uncle who begrudgingly inherited him when his parents were killed by the evil Voldemort. But in the world of wizards, small, skinny Harry is famous as a survivor of the wizard who tried to kill him. He is left only with a lightning-bolt scar on his forehead, curiously refined sensibilities, and a host of mysterious powers to remind him that he's quite, yes, altogether different from his aunt, uncle, and spoiled, piglike cousin Dudley.

A mysterious letter, delivered by the friendly giant Hagrid, wrenches Harry from his dreary, Muggle-ridden existence: "We are pleased to inform you that you have been accepted at Hogwarts School of Witchcraft and Wizardry." Of course, Uncle Vernon yells most unpleasantly, "I AM NOT PAYING FOR SOME CRACKPOT OLD FOOL TO TEACH HIM MAGIC TRICKS!" Soon enough, however, Harry finds himself at Hogwarts with his owl Hedwig... and that's where the real adventure--humorous, haunting, and suspenseful--begins. Harry Potter and the Sorcerer's Stone, first published in England as Harry Potter and the Philosopher's Stone, continues to win major awards in England. So far it has won the National Book Award, the Smarties Prize, the Children's Book Award, and is short-listed for the Carnegie Medal, the U.K. version of the Newbery Medal. This magical, gripping, brilliant book--a future classic to be sure--will leave kids clamoring for Harry Potter and the Chamber of Secrets and Harry Potter and the Prisoner of Azkaban. (Ages 8 to 13) --Karin Snelson

The beloved first book of the Harry Potter series, now fully illustrated by award-winning artist Jim Kay. For the first time, J. K. Rowling's beloved Harry Potter books will be presented in lavishly illustrated full-color editions. Rowling herself selected artist Jim Kay, whose over 100 illustrations make this deluxe format as perfect a gift for the child being introduced to the series as for the dedicated fan. Harry Potter has never been the star of a Quidditch team, scoring points while riding a broom far above the ground. He knows no spells, has never helped to hatch a dragon, and has never worn a cloak of invisibility. All he knows is a miserable life with the Dursleys, his horrible aunt and uncle, and their abominable son, Dudley - a great big swollen spoiled bully. Harry's room is a tiny closet at the foot of the stairs, and he hasn't had a birthday party in eleven years. But all that is about to change when a mysterious letter arrives by owl messenger: a letter with an invitation to an incredible place that Harry - and anyone who reads about him - will find unforgettable.

1. Harry Potter and the Sorcerer's Stone

2. Harry Potter and the Sorcerer's Stone (Paperback or Softback)

3. Harry Potter and the Sorcerer's Stone

Book Description Paperback. Condition: New. Paperback. For use in schools and libraries only. Rescued from the outrageous neglect of his aunt and uncle, a young boy with a great destiny proves his worth while attending Hogwarts School of Witch.Shipping may be from multiple locations in the US or from the UK, depending on stock availability. 422 pages. 0.503. Seller Inventory # 9781594130007

6. Harry Potter and the Sorcerer's Stone

7. Harry Potter And The Sorcerers Stone

8. Harry Potter and the Sorcerer's Stone

9. Harry Potter and the Sorcerer's Stone

10. Harry Potter and the Sorcerer's Stone