Items related to The Dressmaker Of Khair Khana

The Dressmaker Of Khair Khana 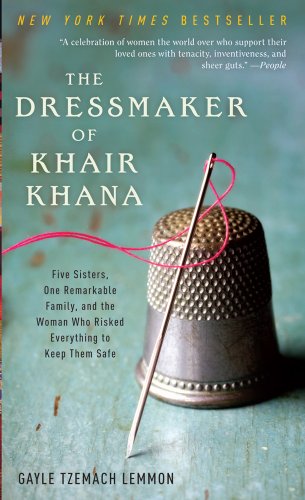 Kamila Sidiqi's life changed overnight when the Taliban seized control of Afghanistan. After her father and brother were forced to flee, she became the sole breadwinner for her five siblings. Banned from school, confined to her home, and armed only with determination, she picked up a needle and thread to create a thriving business that saved their lives.

"The Dressmaker of Khair Khana" tells the incredible true story of this unlikely entrepreneur who mobilized her community under the Taliban. A story of war, it is also a story of family, faith, and resilience in the face of despair. These women are not victims--they are the glue that holds families together; they are the backbone and the heart of their nation. Kamila Sidiqi's journey will inspire you, but it will also change the way you think about one of the most important political and humanitarian issues of our time.


The life Kamila Sidiqi had known changed overnight when the Taliban seized control of the city of Kabul. After receiving a teaching degree during the civil war—a rare achievement for any Afghan woman—Kamila was subsequently banned from school and confined to her home. When her father and brother were forced to flee the city, Kamila became the sole breadwinner for her five siblings. Armed only with grit and determination, she picked up a needle and thread and created a thriving business of her own.

The Dressmaker of Khair Khana tells the incredible true story of this unlikely entrepreneur who mobilized her community under the Taliban. Former ABC News reporter Gayle Tzemach Lemmon spent years on the ground reporting Kamila's story, and the result is an unusually intimate and unsanitized look at the daily lives of women in Afghanistan. These women are not victims; they are the glue that holds families together; they are the backbone and the heart of their nation. Afghanistan's future remains uncertain as debates over withdrawal timelines dominate the news.

The Dressmaker of Khair Khana moves beyond the headlines to transport you to an Afghanistan you have never seen before. This is a story of war, but it is also a story of sisterhood and resilience in the face of despair. Kamila Sidiqi's journey will inspire you, but it will also change the way you think about one of the most important political and humanitarian issues of our time.

Since a 1993 climb of Pakistan's K2, Greg Mortenson has worked in rural Afghanistan and Pakistan to promote education and literacy--establishing 145 schools, primarily for girls, which provide education to over 64,000 students, including 52,000 females. He is a co-author of The New York Times bestsellers Three Cups of Tea and Stones Into Schools.

Greg Mortenson: In The Dressmaker of Khair Khana, Kamila and her sisters sew a collection of wedding dresses overnight for a wedding party they later find out is connected to the Taliban. How did writing this book affect your view of the Taliban period?

Gayle Tzemach Lemmon: That scene in the book captures precisely the extraordinary complexity of the period. Reporting on the Taliban period I quickly learned there were many different views of what those years were like, depending on who you were, what you did, and where you lived. A lot of women I knew, including, of course, Kamila, told me stories about local Talibs who knew of their work and even helped them to keep it going. And they said that many of the Taliban in their neighborhood were men they had known for years who simply needed to support their families.

What I kept coming back to—and what moved me deeply during so many conversations with young women , some of them tearful—was the raw loss they felt at having been deprived of five and a half years of education. And yet even amid all that despair they found ways to come together to build a community for the sake of their families. We are so used to seeing women as victims of war to be pitied rather than survivors of war to be respected. I really hope The Dressmaker of Khair Khana does its small part to change that.

Mortenson: How has your work at Harvard Business School informed your view of Afghanistan’s predicament?

Lemmon: My experience at HBS has made me even more keenly aware of the constellation of obstacles facing entrepreneurs in some of the toughest parts of the world. That’s perhaps why I am so taken by stories of entrepreneurs like Kamila who succeed every day despite all the obstacles (and sometimes even because of them).

Economic growth strengthens families and communities. More attention must be paid by Afghanistan’s leaders and the international community to the importance of making business easier for entrepreneurs, so they can spend time making money to support their families and less time fighting red tape, corruption and security obstacles.

Mortenson: In many ways, The Dressmaker of Khair Khana reads like a novel, and yet it is all true. How much energy did you focus on the craft of storytelling vs. the reporting itself?

Lemmon: I believe in the power of stories to shape and change our world. The Dressmaker happens to be set in Afghanistan during the Taliban, but it could just as easily have been the US during the Civil War or the UK during World War II. Storytelling allows us to see just how similar our struggles really are. My hope was that my godmother and my aunt, who will never go to Afghanistan, could pick up this book and see themselves in this universal story of family and faith.

For me, the reporting is where the joy is—it’s a privilege to be allowed to take a step into people’s lives and to be entrusted with telling their story. In this case the reporting was much more physically difficult than the storytelling—the fall of 2008 in particular was a time during which kidnappings and bombings became regular occurrences in Kabul; both Afghans and foreigners I visited with constantly swapped stories of terrifying incidents which involved their friends and relatives. I knew a lot of people who were affected by the violence, and all the insecurity made it much harder to convince young women to speak with me about their experiences.

Mortenson: You’ve spent a lot of time on the ground in Afghanistan. What is it like to travel there as a young woman?

Lemmon: I love going to Afghanistan, though the trip from California is nearly 40 hours. It is a beautiful country with incredibly generous people who will give you anything they have even if it is all they have. (And I highly recommend the food!)

Being a young woman actually made my work easier. I could meet women of all ages and spend time with them at their homes hearing their stories and sharing my own. This is a world many foreign men will never have access to, for cultural reasons. I also could meet Afghan men because, as a foreign woman, you sort of fit a third category—not male, but not exactly female, either. I worked hard to build trust with those women and men who entrusted me with their stories—I tried to learn Dari and to draw as little attention to my ‘foreign-ness’ as possible: I often was the frumpiest woman I saw all day in my uniform of black pants, black socks, black shoes, black t-shirt, and a dark jacket and head scarf. I think those I wrote about respected the fact that I kept coming back to Afghanistan.

Mortenson: You've worked and studied in conflict and post-conflict regions such as Rwanda, Bosnia and Afghanistan. Women are rarely involved in the high level decision making that affects conflict negotiations or even consulted about their own creative ideas for resolution. How can we help and empower women to play a much larger role in resolving conflicts?

Lemmon: This is a question I think about all the time. We are used to women pulling families through war, but having no say in the peace which follows. This must change for the world to be a safer, more stable place.

A great example has been set by the women of Liberia, who insisted their voices be heeded when it came time for UN negotiations to end their nation’s civil war. (There is a great film about their push to be heard called “Pray the Devil Back to Hell.”) Afghan women, too, are speaking up to make sure that no peace negotiations happen without their real and substantive representation. Each one of us can help advance their cause and this effort by insisting that our own elected officials don’t take part in any talks in which women don’t take part. Holding our own leaders accountable is a great place to start.

Gayle Tzemach Lemmon is a Senior Fellow at the Council on Foreign Relations and a contributor to Atlantic Media’s Defense One, writing on national security and foreign policy issues. She is the bestselling author of The Dressmaker of Khair Khana and has written for Newsweek, the Financial Times, International Herald Tribune, Christian Science Monitor, CNN.com, and the Daily Beast, as well as for the World Bank and Harvard Business School.

The Dressmaker Of Khair Khana