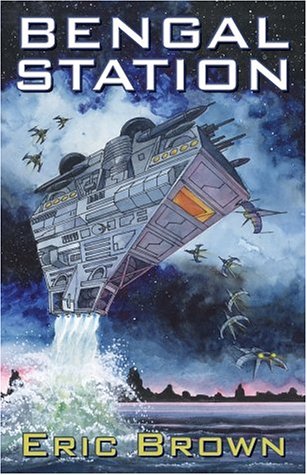 Jeff Vaughan, a world-weary telepath employed by the spaceport on Bengal Station, discovers a sinister cult that worships a mysterious alien god. The Church of the Adoration of the Chosen One uses drugs to commune with the ultimate - and murder to silence those who oppose their beliefs. Together with Indian cop Jimmy Chandra, Vaughan's investigations take him to the colony planet of Verkerk's World and the terrible secret of the extraterrestrial Vaith. . . . Meanwhile, in Thailand, street-girl Sukara dreams of being reunited with her long-lost sister on Bengal Station. She meets Osborne, a telepath posing as a businessman with his own secrets, who promises to take her away from her life of prostitution in Bangkok. They travel to Bengal Station, and there Sukara learns of her sister's fate, and unwittingly leads Osborne to his target - Jeff Vaughan. The story follows Vaughan as his mistrust of his fellow humans is overturned by his growing feelings for Thai street-girl Sukara, one of the few good people he's ever encountered in a life of reading cynical, jaded minds. Bengal Station is exotic noir - Blade Runner meets Chinatown - with characters the reader will care about, fast action, and thought-provoking ideas.

Eric Brown, born in 1960, is the author of sixteen books, including science fiction novels, collections and books for children. He is married to the writer and medievalist Finn Sinclair and they live in Haworth, West Yorkshire, England.

Eric Brown, born in 1960, is the author of sixteen books, including science fiction novels, collections and books for children. He is married to the writer and medievalist Finn Sinclair and they live in Haworth, West Yorkshire, England.

"From a darkly humorous tale of the power of words (Death and the Librarian) to a never-before-published response to events of September 11 (Ilion), Friesner's 12 stories illustrate the author's acutely sensitive vision of wonder in the everyday world... Known primarily for his 'Star Wars' novels... Zahn's short stories also deliver strong plots and memorable characters... Zebrowski's many novels (e.g. Macrolife) mark him as a visionary as well as a master of hard sf. The ten short stories collected in In the Distance provide a benchmark of his creativity... the author expands his concept of the human condition to embrace the stars. Part of Five Star's continuing commitment to showcasing the short fiction of the genre's most prominent author's, these three volumes belong in most libraries where short sf is popular."
-- Library Journal (December 2002) (Library Journal 20021201)