Items related to The Coming of the Third Reich

Richard J. Evans The Coming of the Third Reich

The Coming of the Third Reich 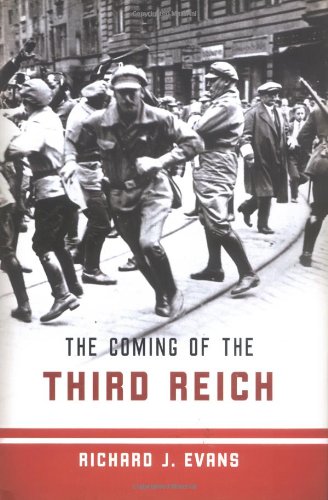 A definitive history of Adolf Hitler's rise to power and the collapse of democracy in Nazi Germany explains why Nazism's ideology of hatred and racism found fertile ground in a country embittered by military defeat and economic disaster following World War I, undermined by an alienated army and civil service, and prey to widespread resentment, suspicion, and extremism. 75,000 first printing.

Richard J. Evans was educated at Oxford, has taught at Columbia and the University of London, and is currently the Professor of Modern History at Cambridge. His books include Death in Hamburg (winner of the Wolfson Literary Award for History), In Hitler's Shadow, Rituals of Retribution (winner of the Fraenkel Prize in Contemporary History), In Defense of History, and Lying About Hitler.

On 10 May 1933, German students organized an "act against the un-German spirit" in nineteen university towns across the land. They compiled a list of "un-German" books, seized them from all the libraries they could find, piled them up in public squares and set them alight. In Berlin the book-burning event was joined at the students’ request by Joseph Goebbels. He told them that they were "doing the right thing in committing the evil spirit of the past to the flames" in what he called a "strong, great and symbolic act.”

One after another, books were thrown onto the funeral pyre of intellect, to the accompaniment of slogans such as "Against class struggle and materialism, for the national community and an idealistic outlook: Marx, Kautsky"; "Against decadence and moral decay, for discipline and morality in family and state: Heinrich Mann, Ernst Glaeser, Erich Kästner."  The works of Freud were consigned to the flames for their "debasing exaggeration of man’s animal nature"; the books of the popular historian and biographer Emil Ludwig were burned for their "denigration" of the "great figures" of German history; the writings of the radical pacifist journalists Kurt Tucholsky and Karl von Ossietzky were destroyed for their "arrogance and presumption." A particular category in itself was reserved for Erich Maria Remarque, whose critical novel All Quiet on the Western Front was thrown onto the fire "against literary betrayal of the soldiers of the World War, for the education of the nation in the spirit of military preparedness." Many other books besides those read out in these incantatory slogans were thrown onto the pyres. The national student organization issued "twelve theses against the un-German spirit" to accompany the action, demanding the introduction of censorship and the purging of libraries and declaring: "Our opponent is the Jew and anyone who submits to him."

Already by 12 March, in a prelude to this action, stormtroopers had ransacked the library of the trade union center in Heidelberg, removed books and burned them in a small bonfire outside the door. A similar event had taken place outside Magnus Hirschfeld’s sex research institute in Berlin on 6 May.  But the 10 May book burning was on a much larger scale and much more thoroughly prepared. Students had been combing libraries and bookshops in readiness for the occasion since the middle of April. Some booksellers courageously refused to hang up posters advertising the event in their shop windows, but many others gave in to the threats with which the students accompanied their action. In Heidelberg, where the book burning took place on 17 May, the students processed with flaming torches, accompanied by SA, SS and steel helmets and members of the dueling corps, and threw Communist and Social Democratic insignia into the flames as well as books. The event was accompanied by the singing of the Horst Wessel Song and the national anthem. Speeches were delivered in which the action was presented as a blow against the "un-German spirit." The Weimar Republic had incorporated this "Jewish-subversive" spirit; it was now finally consigned to history.

All of this marked the culmination of a widespread action "against the un-German spirit" set in motion weeks before by the Propaganda Ministry. As so often in the history of the Third Reich, the apparently spontaneous action was in fact centrally coordinated, although not by Goebbels, but by the national student union. The Nazi official in charge of purging Berlin’s public libraries helpfully provided a list of the books to be burned, and the central office of the national student union wrote and distributed the slogans to be used in the ceremony. In this way, the Nazi student organization ensured that the book burning took a roughly similar course in all the university towns where it was carried out. And where the students led, others followed, in localities across the land. At a celebration of the summer solstice of 1933 in the small town of Neu-Isenburg, for instance, eight thousand people watched "Marxist" literature being burned in a huge pile in an open space behind the fire station. As the local women’s gymnastics club danced around the fire, the local party leader gave a speech, followed by a rendition of the Horst Wessel Song by the assembled multitude.  Book burning was by no means a practice confined to the highly educated.

But one precedent above all others inspired the action of 10 May 1933. The Nazi book burning was a conscious echo of an earlier ritual performed by radical nationalist students at the celebration of the 18 October 1817 three hundredth anniversary of Martin Luther’s famous launching of the Reformation with the publication of his theses attacking the Catholic Church. At the close of the day’s festivities at the Wartburg castle in Thuringia, the students had thrown symbols of authority and "un-German" books such as the Code Napoléon onto a bonfire in a form of symbolic execution. This action might have provided a precedent in Germany’s canon of nationalist demonstrations, but in fact it had little in common with its later imitation in 1933, since a principal concern of the Wartburg festival was to express solidarity with Poland and to demonstrate in favor of the freedom of the German press, still constricted by massive censorship from the police regime inspired by Prince Metternich. Still, as the flames rose to the skies in Germany’s ancient seats of learning on 10 May 1933, encouraged or tolerated by the newly Nazified university authorities, there must have been more than a few who recalled the poet Heinrich Heine’s comment

1. The Coming of the Third Reich

2. The Coming of the Third Reich

3. The Coming of the Third Reich

4. The Coming of the Third Reich

5. The Coming of the Third Reich

6. The Coming of the Third Reich

7. The Coming of the Third Reich

8. The Coming of the Third Reich

9. The Coming of the Third Reich

10. The Coming of the Third Reich Richard J. Evans