Items related to Things Worth Fighting for: Collected Writings

Things Worth Fighting for: Collected Writings 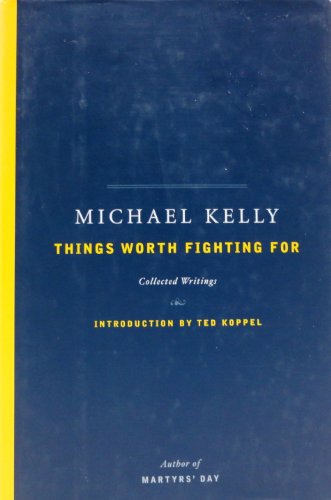 A variety of political, international, and personal topics is covered in this collection of magazine and newspaper stories, articles, and columns by the notable journalist, killed in 2003 while covering the Iraq war, displaying his gift for getting to the heart of the matter through candor and wit in his writing. 25,000 first prinitng.

Michael Kelly's remarkably varied career ranged from war correspondent to presidential campaign reporter to syndicated columnist to editor of three magazines (most recently the award-winning Atlantic Monthly). Publications he wrote for included the New York Times, The New Yorker, GQ, and Baltimore Sun. His coverage of the Gulf War won a National Magazine Award and an Overseas Press Award, and his 1992 book, Martyrs' Day: Chronicle of a Small War, won the PEN/Martha Albrand Award. While covering the Iraq war as editor at large of the Atlantic Monthly and a columnist for the Washington Post, he was killed on April 4, 2003, when the humvee he was riding in came under fire. He is survived by his wife and two sons.

No, if you want to finger any one person, place, or thing for what went wrong with America, you need look no further than that accidental one man validation of the great-man theory of history, Francis Albert Sinatra, 1915-98. Yes-The Voice, the Chairman of the Board, Old Blue Eyes, the leader of the (rat) pack, the swinger in chief-he's the culprit. It's all Frankie's fault.

Sinatra, as every obit observed, was the first true modern pop idol, inspiring in the 1940s the sort of mass adulation that was to become a familiar phenomenon in the '50s and '60s. One man, strolling onto the set at precisely the right moment in the youth of the Entertainment Age, made himself the prototype of the age's essential figure: the iconic celebrity. The iconic celebrity is the result of the central confusion of the age, which is that people possessed of creative or artistic gifts are somehow teachers-role models-in matters of personal conduct. The iconic celebrity is idolized-and obsessively studied and massively imitated-not merely for the creation of art but for the creation of public self, for the confection of affect and biography that the artist projects onto the national screen.

And what Frank Sinatra projected was: cool. And here is where the damage was done. Frank invented cool, and everyone followed Frank, and everything has been going to hell ever since.

In America, B.F., there was no cool. There was smart (as in the smart set), and urbane, and sophisticated, and fast and hip; but these things were not the same as cool. The pre-Frank hip guy, the model of aesthetic and moral superiority to which men aspired, is the American male of the 1930s and 1940s. He is Humphrey Bogart in The Big Sleep or Casablanca or Archie Goodwin in Rex Stout's Nero Wolfe novels. He possesses an outward cynicism, but this is understood to be merely clothing; at his core, he is a square. He fights a lot, generally on the side of the underdog. He is willing to die for his beliefs, and his beliefs are, although he takes pains to hide it, old-fashioned. He believes in truth, justice, the American way, and love. He is on the side of the law, except when the law is crooked. He is not taken in by jingoism but he is himself a patriot; when there is a war, he goes to it. He is, after his fashion, a gentleman and, in a quite modern manner, a sexual egalitarian. He is forthright, contemptuous of dishonesty in all its forms, from posing to lying. He confronts his enemies openly and fairly, even if he might lose. He is honorable and virtuous, although he is properly suspicious of men who talk about honor and virtue. He may be world-weary, but he is not ironic.

The new cool man that Sinatra defined was a very different creature. Cool said the old values were for suckers. Cool was looking out for number one always. Cool didn't get mad; it got even. Cool didn't go to war: Saps went to war, and anyway, cool had no beliefs it was willing to die for. Cool never, ever, got in a fight it might lose; cool had friends who could take care of that sort of thing. Cool was a cad and boastful about it; in cool's philosophy, the lady was always a tramp, and to be treated accordingly. Cool was not on the side of the law; cool made its own laws. Cool was not knowing but still essentially idealistic; cool was nihilistic. Cool was not virtuous; it reveled in vice. Before cool, being good was still hip; after cool, only being bad was.

Quite a legacy. On the other hand, he sure could sing.

--from Things Worth Fighting For by Michael Kelly, Copyright © 2004 The Estate of Michael Kelly, published by The Penguin Press, a member of Penguin Group (USA) Inc., all rights reserved, reprinted with permission from the publisher.

1. Things Worth Fighting for: Collected Writings

2. Things Worth Fighting for: Collected Writings

3. Things Worth Fighting for: Collected Writings