Items related to Colossus: The Price of America's Empire

Colossus: The Price of America's Empire 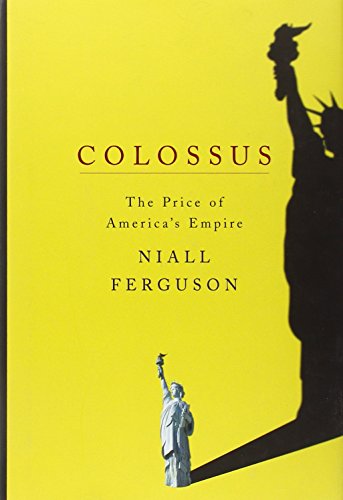 Is America an empire? Certainly not, according to our government. Despite the conquest of two sovereign states in as many years, despite the presence of more than 750 military installations in two thirds of the world’s countries and despite his stated intention "to extend the benefits of freedom...to every corner of the world," George W. Bush maintains that "America has never been an empire." "We don’t seek empires," insists Defense Secretary Rumsfeld. "We’re not imperialistic."

Nonsense, says Niall Ferguson. In Colossus he argues that in both military and economic terms America is nothing less than the most powerful empire the world has ever seen. Just like the British Empire a century ago, the United States aspires to globalize free markets, the rule of law, and representative government. In theory it’s a good project, says Ferguson. Yet Americans shy away from the long-term commitments of manpower and money that are indispensable if rogue regimes and failed states really are to be changed for the better. Ours, he argues, is an empire with an attention deficit disorder, imposing ever more unrealistic timescales on its overseas interventions. Worse, it’s an empire in denial—a hyperpower that simply refuses to admit the scale of its global responsibilities. And the negative consequences will be felt at home as well as abroad. In an alarmingly persuasive final chapter Ferguson warns that this chronic myopia also applies to our domestic responsibilities. When overstretch comes, he warns, it will come from within—and it will reveal that more than just the feet of the American colossus is made of clay.

"The United States today is an empire—but a peculiar kind of empire," writes Niall Ferguson. Despite overwhelming military, economic, and cultural dominance, America has had a difficult time imposing its will on other nations, mostly because the country is uncomfortable with imperialism and thus unable to use this power most effectively and decisively. The origin of this attitude and its persistence is a principal theme of this thought-provoking book, including how domestic politics affects foreign policy, whether it is politicians worried about the next election or citizens who "like Social Security more than national security." Ferguson, a British historian, has no objection to an American empire, as long as it is a liberal one actively underwriting the free exchange of goods, labor, and capital. Further, he writes that "empire is more necessary in the twenty-first century than ever before" as a means to "contain epidemics, depose tyrants, end local wars and eradicate terrorist organizations." The sooner America embraces this role and acts on it confidently, the better. Ferguson contrasts this persistent anti-imperialistic urge with the attitude held by the British Empire and suggests that America has much to learn from that model if it is to achieve its stated foreign policy objectives of spreading social freedom, democracy, development, and the free market to the world. He suggests that the U.S. must be willing to send money, civilians, and troops for a sustained period of time to troubled spots if there is to be real change—as in Japan and Germany after World War II--an idea that many American citizens and leaders now find repulsive. Rather than devoting limited resources and striving to get complex jobs done in a rush, Americans must be willing to integrate themselves into a foreign culture until a full Americanization has occurred, he writes. Overall, a trenchant examination of a uniquely American dilemma and its implications for the rest of the world. --Shawn Carkonen

Niall Ferguson is Laurence A. Tisch Professor of History at Harvard University, a Senior Research Fellow of Jesus College, Oxford University, and a Senior Fellow of the Hoover Institution, Stanford University. The bestselling author of Paper and Iron, The House of Rothschild, The Pity of War, The Cash Nexus, Empire, and Colossus, he also writes regularly for newspapers and magazines all over the world. Since 2003 he has written and presented three highly successful television documentary series for British television: Empire, American Colossus, and, most recently, The War of the World.

1. Colossus: The Price of America's Empire

2. Colossus: The Price of America's Empire

3. Colossus: The Price of America's Empire

4. COLOSSUS: THE PRICE OF AMERICA'S

5. COLOSSUS: THE PRICE OF AMERICA'S