Items related to Postwar: A History of Europe Since 1945

Judt, Tony Postwar: A History of Europe Since 1945 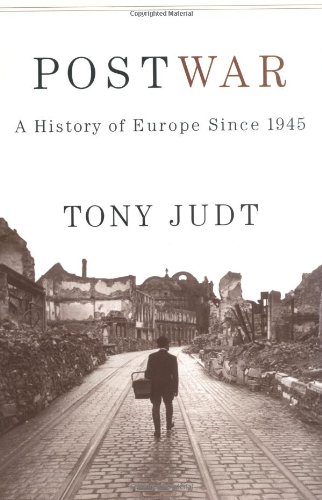 Almost a decade in the making, this much-anticipated grand history of postwar Europe from one of the world's most esteemed historians and intellectuals is a singular achievement. Postwar is the first modern history that covers all of Europe, both east and west, drawing on research in six languages to sweep readers through thirty-four nations and sixty years of political and cultural change-all in one integrated, enthralling narrative. Both intellectually ambitious and compelling to read, thrilling in its scope and delightful in its small details, Postwar is a rare joy.

World War II may have ended in 1945, but according to historian Tony Judt, the conflict's epilogue lasted for nearly the rest of the century. Calling 1945-1989 "an interim age," Judt examines what happened on each side of the Iron Curtain, with the West nervously inching forward while the East endured the "peace of the prison yard" until the fall of Communism in 1989 signaled their chance to progress. Though he proposes no grand, overarching theory of the postwar period, Judt's massive work covers the broad strokes as well as the fine details of the years 1945 to 2005. No one book (even at nearly a thousand pages) could fully encompass this complex period, but Postwar comes close, and is impressive for its scope, synthesis, clarity, and narrative cohesion.

Judt treats the entire continent as a whole, providing equal coverage of social changes, economic forces, and cultural shifts in western and eastern Europe. He offers a county-by-county analysis of how each Eastern nation shed Communism and traces the rise of the European Union, looking at what it represents both economically and ideologically. Along with the dealings between European nations, he also covers Europe's conflicted relationship with the United States, which learned much different lessons from World War II than did Europe. In particular, he studies the success of the Marshall Plan and the way the West both appreciated and resented the help, for acceptance of it reminded them of their diminished place in the world. No impartial observer, Judt offers his judgments and opinions throughout the book in an attempt to instruct as well as inform. If a moral lesson is to come from World War II, Judt writes, "then it will have to be taught afresh with each passing generation. 'European Union' may be an answer to history, but it can never be a substitute." This book would be an excellent place to start that lesson. --Shawn Carkonen

Tony Judt was the Erich Maria Remarque Professor of European Studies at New York University, as well as the founder and director of the Remarque Institute, dedicated to creating an ongoing conversation between Europe and the United States. He was educated at King’s College, Cambridge, and the École Normale Supérieure, Paris, and also taught at Cambridge, Oxford, and Berkeley. Professor Judt was a frequent contributor to The New York Review of Books, The Times Literary Supplement, The New Republic, The New York Times, and many journals across Europe and the United States. He is the author or editor of fifteen books, including Thinking the Twentieth Century, The Memory Chalet, Ill Fares the Land, Reappraisals: Reflections on the Forgotten Twentieth Century, and Postwar: A History of Europe Since 1945, which was one of The New York Times Book Review’s Ten Best Books of 2005, the winner of the Council on Foreign Relations Arthur Ross Book Award, and a finalist for the Pulitzer Prize. He died in August 2010 at the age of sixty-two.

4. POSTWAR: A HISTORY OF EUROPE SIN