Items related to The Gentle Axe: A Novel

The Gentle Axe: A Novel 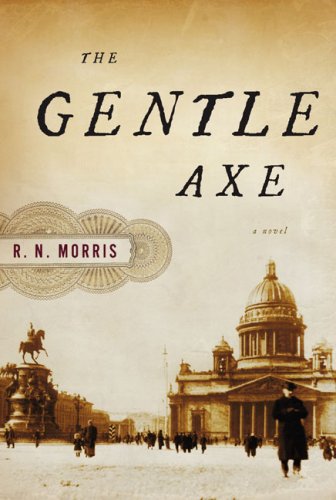 Porfiry Petrovich, the police investigator who worked on the case involving the deranged student Raskolnikov in Dostoevsky's Crime and Punishment, is given another life in R.N. Morris's The Gentle Axe. It is 1867 in St. Petersburg, Russia, on a cold winter morning. An elderly woman is scouring Petrovsky Park in search of a few sticks of firewood. What she finds instead is horrifying: a big, burly peasant hanging by a rope from a tree, with a blood-covered axe tucked into his belt. Nearby, she finds a suitcase. Packed inside is the body of a dwarf, with a deep head wound caused by an axe. Conventional wisdom says that the peasant killed the dwarf and then, in a paroxysm of guilt and remorse, killed himself. That scenario is good enough for everyone but Porfiry.

In a wonderfully atmospheric novel, Morris has created a world-weary protagonist in Porfiry, a man still exhausted from his last case, joined by a collection of absolutely believable characters to flesh out the novel. Mysteries abound and multiply in layers of characterization and narrative. Porfiry's investigation goes on, despite repeated attempts to take him off the case, and it leads him from the dregs of society to its most genteel heights. He follows clues, hunches, people, and stories to get to the bottom of the mystery--and when he does, it comes as a complete surprise, but one that makes perfect sense. This carefully written and entertaining novel will satisfy lovers of mystery, historical crime, and just plain good novels. --Valerie Ryan

Born in Manchester in 1960, R. N. Morris now lives in north London with his wife and two young children. He sold his first short story to a teenage girls' magazine while still a student at Cambridge University, where he read classics. Making his living as a freelance copywriter, he has continued to write, and occasionally publish, fiction. One of his stories, "The Devil's Drum," was turned into a one-act opera, which was performed at the Purcell Room in London's South Bank. Another, "Revenants," was published as a comic book.

6. The Gentle Axe A Novel