Items related to Bomb Power: The Modern Presidency and the National... 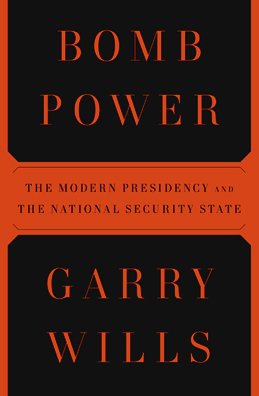 From Pulitzer Prize-winning historian Garry Wills, a groundbreaking examination of how the atomic bomb profoundly altered the nature of American democracy and has left us in a state of war alert ever since.

In Bomb Power, Garry Wills reveals how the atomic bomb transformed our nation down to its deepest constitutional roots-by dramatically increasing the power of the modern presidency and redefining the government as a national security state-in ways still felt today. A masterful reckoning from one of America's preeminent historians, Bomb Power draws a direct line from the Manhattan Project to the usurpations of George W. Bush.

The invention of the atomic bomb was a triumph of official secrecy and military discipline-the project was covertly funded at the behest of the president and, despite its massive scale, never discovered by Congress or the press. This concealment was perhaps to be expected in wartime, but Wills persuasively argues that the Manhattan Project then became a model for the covert operations and overt authority that have defined American government in the nuclear era. The wartime emergency put in place during World War II extended into the Cold War and finally the war on terror, leaving us in a state of continuous war alert for sixty-eight years and counting.

The bomb forever changed the institution of the presidency since only the president controls "the button" and, by extension, the fate of the world. Wills underscores how radical a break this was from the division of powers established by our founding fathers and how it in turn has enfeebled Congress and the courts. The bomb also placed new emphasis on the president's military role, creating a cult around the commander in chief. The tendency of modern presidents to flaunt military airs, Wills points out, is entirely a postbomb phenomenon. Finally, the Manhattan Project inspired the vast secretive apparatus of the national security state, including intelligence agencies such as the CIA and NSA, which remain largely unaccountable to Congress and the American people.

Wills recounts how, following World War II, presidential power increased decade by decade until reaching its stunning apogee with the Bush administration. Both provocative and illuminating, Bomb Power casts the history of the postwar period in a new light and sounds an alarm about the continued threat to our Constitution.

Garry Wills is one of the most respected writers on religion today. He is the author of Saint Augustine’s Childhood, Saint Augustine’s Memory, and Saint Augustine’s Sin, the first three volumes in this series, as well as the Penguin Lives biography Saint Augustine. His other books include “Negro President”: Jefferson and the Slave Power, Why I Am a Catholic, Papal Sin, and Lincoln at Gettysburg, which won the Pulitzer Prize.

Pulitzer Prize-winning historian Garry Wills examines the augmentation of U.S. presidential power, starting with the Manhattan Project, extending into the Cold War, and reaching an apex with President George W. Bush and the War on Terror. Stephen Hoye's voice has just the right emphasis and unrushed pacing as he recounts the secrecy surrounding the development of the atomic bomb, which Truman and subsequent presidents used to assert their power. Wills focuses on the use of nuclear weaponry, the cult of the commander-in-chief, and the worldwide network of military bases used to maintain nuclear supremacy. He also covers how the various intelligence agencies aided in the development of the national security state. Hoye varies his delivery and engages his listeners in these serious topics. B.C.E. © AudioFile 2010, Portland, Maine

Book Description Hardcover. Condition: New. 2010 hardback no marks in the text and is in great condition with dust coverAND AS ALWAYS SHIPPED IN 24 HOURS; and emailed to you a USPS tracking number on all orders; all books are sanitized and cleaned for your protection before mailing. PLEASE NOTE OVER SEAS BUYERS if the book extra large or heavy there will be additional postage due to the new US Postage rates. Seller Inventory # 211024002

Shipping: US$ 42.36
From United Kingdom to U.S.A.
Destination, rates & speeds