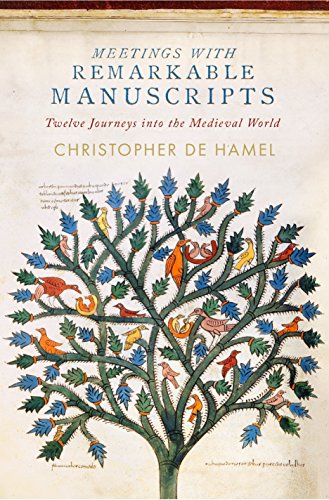 An extraordinary and beautifully illustrated exploration of the medieval world through twelve manuscripts, from one of the world's leading experts.

Winner of The Wolfson History Prize and The Duff Cooper Prize.

Meetings with Remarkable Manuscripts is a captivating examination of twelve illuminated manuscripts from the medieval period. Noted authority Christopher de Hamel invites the reader into intimate conversations with these texts to explore what they tell us about nearly a thousand years of medieval history - and about the modern world, too.

In so doing, de Hamel introduces us to kings, queens, saints, scribes, artists, librarians, thieves, dealers, and collectors. He traces the elaborate journeys that these exceptionally precious artifacts have made through time and shows us how they have been copied, how they have been embroiled in politics, how they have been regarded as objects of supreme beauty and as symbols of national identity, and who has owned them or lusted after them (and how we can tell).

From the earliest book in medieval England to the incomparable Book of Kells to the oldest manuscript of the Canterbury Tales, these encounters tell a narrative of intellectual culture and art over the course of a millennium.   Two of the manuscripts visited are now in libraries of North America, the Morgan Library in New York and the Getty Museum in Los Angeles.

Part travel book, part detective story, part conversation with the reader, Meetings with Remarkable Manuscripts allows us to experience some of the greatest works of art in our culture to give us a different perspective on history and on how we come by knowledge.

Christopher de Hamel is perhaps the best-known writer on medieval manuscripts in the world.  In the course of a long career at Sotheby's he catalogued more illuminated manuscripts than any other person alive, and very possibly more than any one individual has ever done. Christopher de Hamel is a Fellow of Corpus Christi College, Cambridge; he was until recently librarian of Parker Library in Cambridge, a collection which includes many, even most, of the earliest manuscripts in English language and history. De Hamel lives in London and Cambridge.

“Meetings with Remarkable Manuscripts is one of the least likely and most wonderful books I have ever read. Least likely: Where to start? It’s a vanishingly rare pleasure, given the commercial constraints of modern publishing, to handle 600 smoothly weighty pages in which the printed text winds its way seamlessly among more than 200 glorious, often full-color illustrations. And in producing such a gorgeous object, Christopher de Hamel’s publisher has had the courage of his convictions, because its physical and visual delights mirror its commercially unlikely subject matter...[De Hamel] is voraciously completist, recording impressions of each journey, place, building and reading room, as well as every coverage detail of each manuscript’s creation, content and existence as a physical object through time and space... On this archival odyssey, I lost count of the things I learned...[Meetings with Remarkable Manuscripts], like the volumes that are its subject, is a book of wonders.”  - The New York Times Book Review

“Meetings with Remarkable Manuscripts is miles away from academic dry-as-dust scholarship. You’ll love learning from it. Little wonder that in Britain this extraordinary book has already won both the Wolfson History Prize and the Duff Cooper nonfiction prize.” –Washington Post

“De Hamel is a man of extraordinary erudition and easy charm; his book asks many questions of the past, and invokes many mysteries.” –The New Yorker

"An extraordinary book, a work of scholarship and history salted with the author's excitement...It is full of delights, as well as surprising reminders of the shifting ground of knowledge." - Tom Stoppard

“Deeply edifying and hugely entertaining... [De Hamel’s] curiosity and enthusiasm are infectious and his dedicated sleuth-work and educated guesses are invigorating. When not awed by the sheer scope of his expertise or absorbed by his concerted efforts to decipher script or dissect scripture, we are diverted by his light flourishes and witty evaluations.” –Weekly Standard

“Perhaps most important in discussing this magnificent work is to assure you that the overarching erudition is rendered clearly and with great kindness to you, his companion. He shows a shrewd ability in telling you just why this is something you should know. I am a happier and fuller person because this fine man took me on his Grand Tour and told me so many marvelous things.” --Helen Hazen, The American Scholar

“This is a rare example of a book that appeals to both specialist and non-specialist audiences. For a person with no training in manuscript study who would like to know what it’s all about, I could recommend nothing better than reading at least one chapter of this 632-page book, pausing over its many beautiful color illustrations. But anyone with a professional interest in the field will not want to miss de Hamel’s own original thinking about these ancient tomes...a wonderful book.” –Commonweal Magazine

“A glorious book...de Hamel pulls readers in with his unmistakable passion for every facet of these handcrafted treasures.... [and] details each document’s idiosyncrasies while contextualizing its time and place of creation...De Hamel’s delightful book is bound to inspire a new set of medievalists.” –Publishers Weekly, starred review

“Interested general readers will appreciate de Hamel’s lucid treatment of the themes and literary techniques that mark these manuscripts as cultural milestones...But they will marvel at the lavish reproductions of the masterful calligraphy and dazzling illuminations that have long made the manuscripts irresistible to collectors. A must-read for anyone who values the history of the written word.” –Booklist, starred review

“A palaeographer's fascinating investigation of medieval culture. A former librarian of Parker Library at Cambridge and cataloger of illuminated manuscripts for Sotheby's, de Hamel brings extensive expertise to his meticulous examination of 12 celebrated manuscripts created from the sixth to the 16th century...The book is sumptuously illustrated...A rare, erudite, and delightfully entertaining history.” —Kirkus Reviews, starred review

"Reading is my life, but only about once a decade do I find a book that seems to tilt the world, so afterwards it appears different." Fiammetta Rocco, Economist '1843'

"Encountering an original medieval manuscript is in some ways like encountering a famous person, says De Hamel. With meticulous biblio-sleuthing he seeks to divine the hidden 'character' of the celebrity documents under his scrutiny. ... De Hamel's book, scholarly but unfailingly readable, is the beginning of wisdom in all things scribal and scriptural." – Ian Thomson, Observer

"Christopher de Hamel is one of the world's leading palaeographers ... In this splendid new book he has numerous fascinating, scandalous, funny and gloriously entertaining tales. ... His enthusiasm, irreverence and wit are irresistible. ... Meetings with Remarkable Manuscripts is, like each one of the 12 treasures it celebrates, a book of marvels." – John Banville, Financial Times

“He has undertaken an almost impossible task. Instead of guiding our own exploration of these beautiful objects, his book has to serve as a substitute for the real thing. In this, he succeeds brilliantly, producing a truly wonderful book in the process - wise, entertaining and informative. ... Beneath his urbane manner, Christopher de Hamel is a formidable scholar.” – Jonathan Sumption, Spectator

"With scholarly elegance, Christopher de Hamel opens the door and invites us to join him for the intellectual expedition of a lifetime...This is an endlessly fascinating and enjoyable book." – Neil MacGregor

"Erudite and enthusiastic...de Hamel has catalogued more medieval manuscripts than anyone in history; everyone, not only academics should listen to what he has said." – Economist

"Spectacular ... Manuscripts are the lifeblood of medieval history. De Hamel, the librarian of Corpus Christi, has spent a lifetime handling, cataloguing and interpreting these gorgeous objects....If I could walk you to your nearest bookshop, take Ł30 from your wallet, and place this wonderful book in your hands, I would." – Peter Thonemann, Sunday Times

One of the cultural highlights of the autumn...Christopher de Hamel has turned a lifelong obsession with ancient literature into a book that critics are comparing to A History of the World in 100 Objects and the wonderful The Hare with Amber Eyes." - Kirsty Ward, Newsnight

"He reveals a stupendous discovery has made about this book that no one had noticed in its centuries on this earth. ... De Hamel makes an informative, entertaining book (the most suitable medium, after all), and no one but he could have written it." - Christopher Howse, Daily Telegraph

"Christopher de Hamel's learned adventures amid some of the West's greatest manuscript treasures effortlessly outclass Eco's The Name of the Rose in elegance and excitement. They are also much funnier." -  Diarmaid MacCulloch

[Meetings with Remarkable Manuscripts] is de Hamel’s masterpiece, and has come at the end of a long and distinguished career. De Hamel writes in his introduction of his desire to communicate “the thrill of bringing a well-informed but non-specialist reader into intimate contact with major medieval manuscripts.” He does it brilliantly, and in full color. This would have to be my book of the year. - Jon M. Sweeney, American Magazine

Meetings With Remarkable Manuscripts : Twelve Journeys into the Medieval World