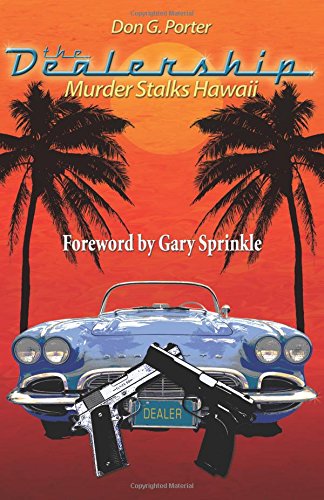 Daren Chambers, wealthy owner of a car dealership in Hawaii, has been shot to death. His beautiful wife, Sally, co-owner and business partner, is terrified. She’s afraid that whoever killed Darren will be coming after her next--and she's right. She hires Dick and George, the Payne and Clark Detective Agency, to investigate the killing. The police may be working on the who, but Sally is worried about the why. The killer has the same idea, and Dick and George scramble to protect her from bombs on Oahu, stalkers on Maui, murder on the Big Island, and machine guns on Kauai.

Don spent 25 years in Alaska covering the state as an electronic engineer for Midnight Sun Broadcasting Company and pilot for Bushmaster Air Alaska. His time in Hawaii was spent doing warranty house calls for Sony, exploring the Pacific: Saipan, Yap, Pohnpei, Truck, and Guam. Don settled in Hawaii and spent 15 years traveling the state as an engineer for the ABC television network. When word processors made it possible for people, who can neither spell nor punctuate, to write books, it was time to share some remarkable experiences both in Alaska and the Pacific. To make the stories palatable the obvious format seemed to be murder mysteries. The first step was to ensure authenticity by enrolling in Continuing Adult Education and earning a handsome diploma in the Private Investigator curriculum. Don has retired in Bisbee, Arizona, a former copper mining town now taken over by artists, writers. In Bisbee he writes without distraction because there isn’t much else to do.

The Dealership is intrigue and humor with a special flavor of Hawaii. Hawaii comes alive with the nuances of modern culture mixed with historical influence; fertile ground for a compelling mystery. Along the way we get a Hawaiian history lesson--a true feeling for the place, its people, and our cultural idiosyncrasies. Porter's descriptive talents put you in the moment, right there in every scene. --Gary Sprinkle, Television Anchor, Hawaii

The Dealership reminds me of my army tour in Hawaii. The landscape was the most vivid greens with multi-hued flowers everywhere. Breathtaking rocky cliffs of the Pali overlooked tropical jungle and the vast Pacific. Power and grandeur of nature were epitomized on the north shore by giant waves crashing on jagged rocks. Porter captures all of this in his rollicking mystery. --Ivan N. Pierce, Author, An Infantry Lieutenant s Viet Nam and Missing in Cordova