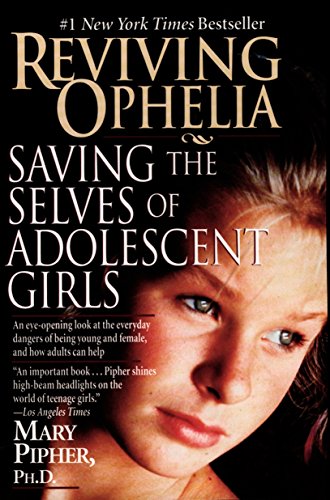 Everybody who has survived adolescence knows what a scary, tumultuous, exciting time it is. But if we use memories of our experiences to guide our understanding of what today's girls are living through, we make a serious mistake. Our daughters are living in a new world. Reviving Ophelia is a call to arms from Dr. Mary Pipher, a psychologist who has worked with teenagers for more than a decade. She finds that in spite of the women's movement, which has empowered adult women in some ways, teenage girls today are having a harder time than ever before because of higher levels of violence and sexism. The current crises of adolescence - frequent suicide attempts, dropping out of school and running away from home, teenage pregnancies in unprecedented numbers, and an epidemic of eating disorders - are caused not so much by "dysfunctional families" or incorrect messages from parents as by our media-saturated, lookist, girl-destroying culture. Young teenagers are not developmentally equipped to meet the challenges that confront them.

Adolescence in America has traditionally involved breaking away from parents, experimenting with the trappings of adult life, and searching for autonomy and independence. Today's teenagers face serious pressures at an earlier age than that at which teenagers in the past did. The innocent act of attending an unsupervised party can lead to acquaintance rape. Having a boyfriend means dealing with sexual pressures, and often leads to pregnancy and/or sexually transmitted diseases. It's no wonder that girls' math scores plummet and depression levels rise when they reach junior high. As they encounter situations that are simply too complex for them to handle, their self-esteem crumbles. The dangers young women face today can jeopardize their futures. It is critical that we understand the circumstances and take measures to correct them. We need to make that precious age of experimentation safe for adolescent girls.

Watch the trailer for the Lifetime movie Reviving Ophelia, to premiere on October 11 at 9pm ET/PT.

At adolescence, says Mary Pipher, "girls become 'female impersonators' who fit their whole selves into small, crowded spaces." Many lose spark, interest, and even IQ points as a "girl-poisoning" society forces a choice between being shunned for staying true to oneself and struggling to stay within a narrow definition of female. Pipher's alarming tales of a generation swamped by pain may be partly informed by her role as a therapist who sees troubled children and teens, but her sketch of a tougher, more menacing world for girls often hits the mark. She offers some prescriptions for changing society and helping girls resist.

Why are more American adolescent girls prey to depression, eating disorders, addictions, and suicide attempts than ever before? According to Dr. Mary Pipher, a clinical psychologist who has treated girls for more than twenty years, we live in a look-obsessed, media-saturated, "girl-poisoning" culture. Despite the advances of feminism, escalating levels of sexism and violence--from undervalued intelligence to sexual harassment in elementary school--cause girls to stifle their creative spirit and natural impulses, which, ultimately, destroys their self-esteem. Yet girls often blame themselves or their families for this "problem with no name" instead of looking at the world around them.

Here, for the first time, are girls' unmuted voices from the front lines of adolescence, personal and painfully honest. By laying bare their harsh day-to-day reality, Reviving Ophelia issues a call to arms and offers parents compassion, strength, and strategies with which to revive these Ophelias' lost sense of self.