Items related to Aquinas and King: A Discourse on Civil Disobedience

Aquinas and King: A Discourse on Civil Disobedience 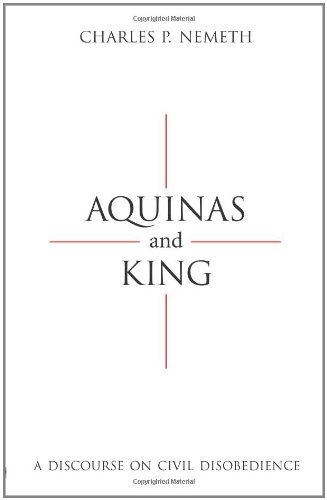 During the tumult of the 1960's, the American character was tested in extraordinary ways none more pressing than the rightful clamor for civil rights in Black community. Existing laws institutionalized the second class citizenry in many quarters and courts were very unsympathetic to the obvious injustices coursing through the American experience. Laws were aplenty most of which served to maintain the unjust status quo. Those seeking reform had a variety of options open when challenging these wrongs. Consider the life and times of Martin Luther King, Jr. How did Dr. King arrive at a philosophy of nonviolent civil disobedience to the inequalities of his day? Why did he choose this method of structural challenge over the other options? Dr. King could have gone in very different directions. Why did he passionately urge his followers to lay down the sword, to accept suffering and humiliation rather than strike his errant and hateful neighbor, and to willingly and very humbly experience the jail cell for his alleged crimes? As King relates: "I've seen too much hate to want to hate, myself, and I've seen hate on the faces of too many sheriffs, too many white citizens' councilors, and too many Klansmen of the South to want to hate, myself; and every time I see it, I say to myself, hate is too great a burden to bear." By examining the man, his life and his work, both written and oratorical, the author concludes that Dr. Martin Luther King, Jr., was in fact a Thomist through and through. Not a Thomist on all things, but as to his understanding of law and its corresponding obligation or lack thereof, King is the ultimate Thomist. In his letters and writings, texts and speeches, King is a regular advocate of the philosophy of St. Thomas Aquinas. A reader can feel the respect that King has for Thomist principles, and in a sense, Thomism is the "antidote" against the ravages of modernity. King's theory of civil disobedience classically adheres to the teachings of St. Thomas Aquinas. Amazingly, he even tells us about his allegiance to the philosophy of St. Thomas. That is what this work is all about a discourse on and a discernment into the compatibility of both men and a revelation that once again, St. Thomas had the answers long before the problem ever emerged.

Charles Nemeth is the Director of Graduate Criminal Justice as well as a professor of Professional Studies at the California University of Pennsylvania.

1. Aquinas and King: A Discourse on Civil Disobedience

2. Aquinas and King: A Discourse on Civil Disobedience

3. Aquinas and King: A Discourse on Civil Disobedience

4. Aquinas and King: A Discourse on Civil Disobedience