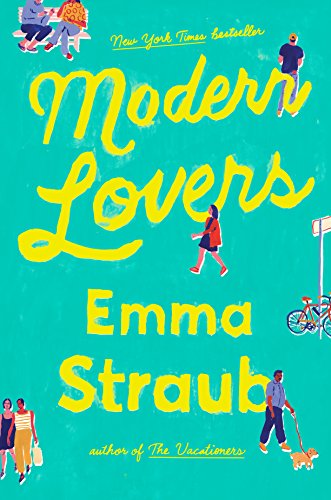 From the author of the New York Times bestseller The Vacationers, a smart, highly entertaining novel about a tight-knit group of friends from college— and what it means to finally grow up, well after adulthood has set in.

Friends and former college bandmates Elizabeth and Andrew and Zoe have watched one another marry, buy real estate, and start businesses and families, all while trying to hold on to the identities of their youth. But nothing ages them like having to suddenly pass the torch (of sexuality, independence, and the ineffable alchemy of cool) to their own offspring.

Back in the band's heyday, Elizabeth put on a snarl over her Midwestern smile, Andrew let his unwashed hair grow past his chin, and Zoe was the lesbian all the straight women wanted to sleep with. Now nearing fifty, they all live within shouting distance in the same neighborhood deep in gentrified Brooklyn, and the trappings of the adult world seem to have arrived with ease. But the summer that their children reach maturity (and start sleeping together), the fabric of the adult lives suddenly begins to unravel, and the secrets and revelations that are finally let loose—about themselves, and about the famous fourth band member who soared and fell without them—can never be reclaimed.

Straub packs wisdom and insight and humor together in a satisfying book about neighbors and nosiness, ambition and pleasure, the excitement of youth, the shock of middle age, and the fact that our passions—be they food, or friendship, or music—never go away, they just evolve and grow along with us.

Emma Straub is the New York Times‒bestselling author of Modern Lovers, The Vacationers, Laura Lamont's Life in Pictures, and the short story collection Other People We Married. Straub's work has been published in fifteen countries. She and her husband co-own Books Are Magic, an independent bookstore in Brooklyn.

Zoe heard some shouting from the house. She shut the radio off and rolled down the window. Ruby and Jane both hustled out the front door, Ruby in the white fringe dress and Jane in a mask of disbelief.

“Are you kidding me with this?” Jane said, poking her head into the passenger-side window.

“Mom, God, it’s just a dress,” Ruby said, slumping into the backseat. “That is definitely not an entire dress.” Jane let herself collapse into the seat, her heavy body rocking the small car as she pulled the door shut and buckled her seat belt. She spoke without turning to face Zoe. “I can’t believe you agreed to let her wear that.”

Zoe put the car in reverse. She caught Ruby’s eye in the rearview mirror. “We’re so excited for you, sweetie.”

Ruby rolled her eyes. It was an involuntary gesture, like breathing, an automatic response to whatever her mothers said. “I can tell,” she said. “You could always just drop me off with Chloe’s family, they’re going to the River Café for dinner.”

“The River Café isn’t what it used to be,” Jane said. “Those stupid Brooklyn Bridge chocolate cakes. It’s for tourists.”

“I know,” Ruby said, and turned to look out the window.

When they got to the school, Jane hopped out and switched places with Zoe—someone was going to have to circle the block to find a parking spot, and they both knew that Ruby would have a meltdown if she had to drive past her school three hundred times before going inside. All the seniors and their families were milling around in front and in the lobby, everyone dressed like they were going to the prom. Whitman didn’t have a prom, of course—that was too square, too suburban. Instead they had a party with the entire faculty in a converted loft space in Dumbo. Zoe was waiting for the e-mail to go out that the students and teachers had been caught having a group orgy in the bathroom. Most of the teachers looked like they could have been students, maybe held back a couple of grades. The young men almost always grew scruffy little beards or goatees, probably just to prove that they could. Ruby had skipped the party, “Because eww,” which Zoe secretly agreed with.

Zoe let Ruby lead her through the crowd in front of the school, weaving in and out. She nodded and waved to the parents she knew, and squeezed the arms of some of the kids. It was a small school, and Ruby had gone there since she was five, and so Zoe knew everyone, whether or not Ruby deigned to speak to them. Ruby’s intermittently loving and cruel cluster of girlfriends—Chloe, Paloma, Anika, and Sarah—were already inside, posing for pictures with their parents and siblings, and Zoe knew that Ruby was likely to ditch her and Jane for her friends as soon as possible. Impending-graduation hormones made regular puberty hormones seem like nothing—Ruby had been a lunatic for months. They went inside through the heavy front door, and Zoe saw Elizabeth and Harry across the lobby.

“Hey, wait,” she said to Ruby, pointing. Ruby reluctantly slowed to a stop and crossed her arms over her chest.

“Ruby! Congratulations, sweetheart!” Elizabeth, bless her, couldn’t be stymied by Ruby’s death stares. “That dress looks phenomenal on you. Yowza!” Zoe watched her daughter soften. She even managed to squeeze out a tiny smile.

“Thanks,” Ruby said. “I mean, it’s just high school. It’s really not that big of a deal. It’s really only a big deal if you don’t graduate from high school, you know what I mean? Like, I also learned how to walk and to use a fork.”

Harry chuckled. “I can tie my shoes,” he said. He kicked his toe into the floor for emphasis, and also to avoid looking Ruby in the eye. Even though Harry and Ruby had grown up together, had lived three houses apart for most of their lives, things had changed in the last few years. When they were children, they’d played together, taken baths together, built forts and choreographed dances. Now Harry could barely speak in front of her. Mostly, when he was standing next to Ruby, all Harry could think about was a photograph that his mother had on her dresser of him and Ruby when he was one and she was two, both of them standing naked in the front yard. His penis looked so tiny, like the stubbiest baby carrot in the bag, the one you might not even eat because you were afraid it was actually a toe.

“Exactly.” Ruby scanned the room, looking over Harry’s head. “Oh, shit,” she said. Zoe, Elizabeth, and Harry all turned to follow her gaze. “Mum, stay here.” She hustled across the room, elbowing people out of her way.

Zoe craned her neck—the room was getting more and more crowded. “Who is she talking to, Harr?”

“It’s Dust,” Harry said, and immediately regretted it. He’d seen them kissing in front of school, and on their street after dark, standing in between parked cars. Dust was obviously not the kind of boy a girl would bring home to her parents, even if her parents were cool, like Ruby’s. There would be too many questions. Dust was the kind of guy, if life had been a sitcom, that Ruby’s moms would have tried to adopt, because it turned out he couldn’t read and had been living on a park bench since he was twelve. But in real life, Dust was just kind of scary, and Ruby should have known better. Harry had lots of good ideas about who she should go out with instead, and they were all him.

“What?” Harry said, waving his hand by his ear. It was getting loud in the school’s lobby, and he was sweating. It was better to pretend he hadn’t heard. Ruby was going to be so mad at him. Harry felt a deep, sudden longing for the indifference she’d shown him since the ninth grade.
The head of the high school came out and shouted for the seniors to get lined up, and the crowd began to disperse. Excited parents took photos of each other with their phones, and a few with real cameras. Teachers wore ties and shook hands. Elizabeth cupped Harry’s shoulder. “I’m sure it’s fine. Should we go get seats? Zo, you want me to save you and Jane spots?”

“Hang on,” Zoe said. Now that people were filing into the auditorium, it was a straight shot through the lobby to the door, where Ruby was having an argument with the boy, who looked like a skinhead. Were there still skinheads? He was taller than Ruby and was stooped over to talk to her, his shoulders rounding like an old man’s. Ruby looked furious, and the boy did, too. His face was pointy and sharp, and his chin jutted out toward her daughter’s sweet face. “Harry, spill it.”

Harry felt his face begin to burn. “Shit,” he said. “He’s her boyfriend.”
“Is his name Dust or Shit?” Elizabeth asked. “What’s the story?” Chloe and Paloma were inching across the room toward Ruby, teetering on their new heels like baby dinosaurs.

Harry opened his mouth to answer—he’d never been good at lying—but just then Ruby let out a little scream, and before he could think about what he was doing, Harry was running across the room. He threw his entire body at Dust, and the two of them hit the floor with a thud. Harry felt Dust roll away and then saw him scurry up and out the door like a hermit crab, on his hands and feet. Ruby stood over Harry with her own hands on her mouth. For a second she looked actually frightened, and the dangly white tassels of her dress shook a tiny bit, almost like she was dancing. It was the most beautiful dress Harry had ever seen. It wasn’t just a dress; it was a religion. It was an erupting volcano that would kill hundreds of pale-faced tourists, and Harry was ready for the lava to flow. Ruby regained her composure and looked around the room. A half circle had formed around them, and their mothers were cutting through it, mouths open like hungry guppies. Ruby turned toward the crowd, smiled, and did a pageant winner wave, her elbow gliding back and forth. Both Chloe and Paloma made mewling noises and reached for her with grasping fingers, but Ruby ignored them. “My hero,” she said archly to Harry, and extended her hand to help him up from the floor.