Items related to The Technopriests 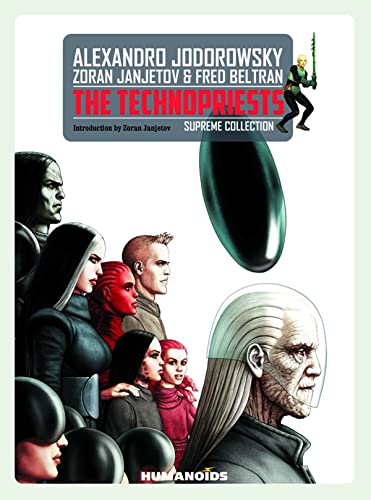 After the Greek tragedy of "The Metabarons," Alexandro Jodorowsky comes back to his biblical roots with this quest reminiscent of Moses and set on a galactic scale. To top it off, the characters and the theme of virtual reality are tailor-made for artist Zoran Janjetov ("Before The Incal"), who finds in Jodorowsky his perfect match. Albino, hero of this space odyssey, remembers here his childhood, his apprenticeship, and the big and small battles he had to fight to fulfill his ambitions in a universe where technological advances are paradoxically matched only by the cruelty and the barbarism of the forces controlling it.

Zoran Janjetov is among the most prominent comics creators of former Yugoslavia and has been published worldwide. Influenced by the works of Walt Disney and encouraged by his parents, he made his first short comic aged seven. After finishing high school, he continued his education at the Academy of Arts in Novi Sad, where he graduated.

Fred Beltran is active in several creative fields. He works as a comics artist, but also as a prolific musician. Beltran saw his first comic album published in 1988. In the early 1990s, he contributed to the collective album “Eros Gone Wild” at Humanoids and pursued a subsequent career in architecture, illustration and theatre stage design. Since 1994, Beltran has mostly used the computer on all his comics work, including the coloring of the series “The Technopriests.” Also in 1994, the first album of his new band Les Snails is released. Beltran cooperated with the Japanese publishing house Kodansha between 1995 and 1997, producing the series “Nina.”

"This sci-fi epic tale is a little different than Jodorowsky’s past work but equally mind-blowing."
- MediaMikes.com
"'The Technopriests' - like all of Jodorowsky's work - explores the deepest, darkest parts of human nature."
- www.figures.com