Items related to The Book of Fate

Meltzer, Brad The Book of Fate

The Book of Fate 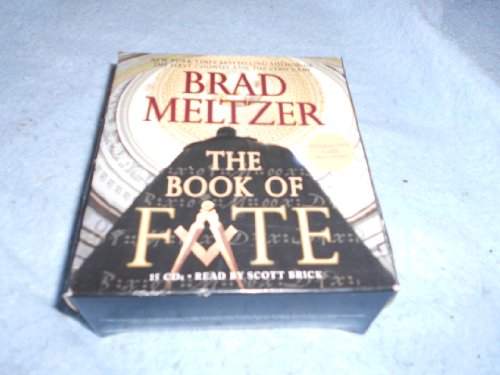 When Ron Boyle, the supposed victim of an assassination, is spotted alive and well in Asia eight years after his purported death, former presidential aide Wes Holloway, permanently disfigured in the same attack, stumbles into the heart of a baffling conspiracy involving Masonic history, an enigmatic code invented by Thomas Jefferson, and the Book of Fate, a repository for disturbing secrets. Simultaneous.

Brad Meltzer is a graduate of the University of Michigan and Columbia Law School. He lives in Miami with his wife and three children.

Brad Meltzer's latest entry to the NYT Bestsellers list sounds as good as it looks, thanks in large part to Scott Brick, who brings a sense of urgency to the characters. Wes Holloway is scarred in body and soul after the failed assassination of his boss, the President of the United States. Brick brings out the humanity of Meltzer's hero, who isn't a superman who laughs in the face of death, but a regular guy. You can hear his confusion when he sees a friend he thought was dead and his fear when he learns that the man who scarred him is back for a second try. And no one does icy villains like Brick. Better allow some extra drive time--you won't want to turn this off. M.S. Winner of AudioFile Earphones Award © AudioFile 2006, Portland, Maine-- Copyright © AudioFile, Portland, Maine