Items related to Strides: Running Through History With an Unlikely Athlete

Cheever, Benjamin Strides: Running Through History With an Unlikely Athlete

Strides: Running Through History With an Unlikely Athlete 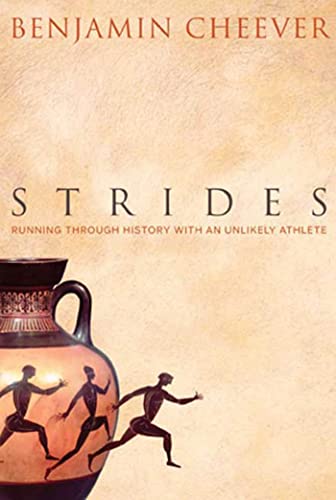 Acclaimed novelist Benjamin Cheever--author of The Plagiarist, Famous After Death, and The Good Nanny--brings his buoyant literary style to this impassioned memoir about the sport that changed his life.

From Pheidippides, who ran the first marathon in 490 BC--bringing news to Athens of the Greek victory on the plains of Marathon--to our own soldiers in Iraq today, running is an integral part of human culture and legend. In Strides, heralded author Benjamin Cheever explores the role of running in human history while interspersing this account with revelations of his own decades-long devotion to the sport.

Cheever has traveled the world writing features for Runner's World magazine, and he draws from this rich experience on every page. His adventures have taken him to Kenya in search of the secrets of the world's fastest long-distance runners and to a 10-K race with American soldiers in Baghdad. Cheever celebrates the quotidian personal satisfaction of a morning run and the more exotic pleasures of the Medoc Marathon in Bordeaux, where fine wines are served at water stations and the first prize is the winner's weight in grand crus. He shares vivid moments from the New York Marathon and waxes rhapsodic about the granddaddy of American distance events--the Boston Marathon. But what truly distinguishes Strides as a memorable read is the unique lens through which this sparkling writer explores our deep bond to running, an experience he likens to that of being able to fly.

BENJAMIN CHEEVER has published in the New York Times, the New Yorker, Gourmet, and Runner's World. He has taught at Bennington College and The New School for Social Research. The author of the highly praised novels The Plagiarist, The Partisan, and Famous After Death, and editor of The Letters of John Cheever, he lives in Pleasantville, New York.

The Fat Man in Green Pajamas

Pheidippides is said to have run the first marathon. That was in September of 490 BC. He brought news that the Persians had been defeated. Athens was saved. Civilization was saved. "Rejoice!" he said, "We conquer!"

Joy in his blood bursting his heart,

The bliss is what I'm after.

Although mortality is part of it. I was moving in a pack of runners 20-odd years ago on a sidewalk in White Plains, New York, after a half-marathon. Spotting others in singlets and with the distinctive post-exertion matted hair, we'd wave our bony little fists. "Good race!" we'd shout.

A funeral cortege appeared suddenly on the street beside us. The contrast between this ominous procession and our own towering spirits silenced the pack and made us--for an instant--ashamed. Then one of the runners waved his fist at the hearse. "Good race!" he shouted.

When long-distance running found me 30 years ago, I had begun the transition that I hoped would be my last. I yearned to become an adult male- -a full suit with a job, a lawn, and a temper. I'd sold the motorcycle. In an exact reversal of the life cycle of the butterfly, I'd stopped flapping around and had settled down to learn a skill. This done, I was reconciled to a long caterpillar-like phase of dull work capped--I fervently hoped-- with solvency.

As a child, I'd felt most myself when I was out of doors. Now I lived on Edgewood Road, but I rarely plunged into the woods from which our development took its name. Although I'd sometimes lurk behind a tree smoking a clandestine cigarette. The only face time I had with Mother Nature was spent weeding the pachysandra or cutting the lawn. I was throat- deep in a marriage that didn't work for anyone, not even the pets. I was employed as the only male on the copy desk at the Reader's Digest magazine. My idea of exercise was cadging cigarettes from colleagues who had the conviction to buy their own. I was 28 years old and all set for a wooden overcoat.

Then I spent $11 on a tag-sale bicycle. The frame was too big for me and had been sloppily repainted in Creamsicle orange. The machine had 10 speeds, though. I'd never owned a bicycle with 10 speeds. "I'll ride it to work," I said, justifying the expense. We had only one reliable car. "Maybe I'll lose some weight." I got a two-piece outfit in lime green with a zipper down the front and zippers at the ankles. Like tuxedo pants, the bottoms had a stripe of darker material down the outer seam. I liked the look, but clearly these "warm-ups" were from the bathrobe/pajamas family, the material sheer, the zippers frail. The label said, "Dry clean only."

I drove a suit, shoes, and neckties to the office one day and left them in the closet. There was a shower in the basement at the Reader's Digest. I could use that.

The next morning, I stuffed a fresh shirt, socks, and underwear into a backpack along with my papers. The largest pack I owned at the time was Swiss Army surplus. Or that's what the girl at the head shop told me when I bought it during my hippie phase. It had wooden buttons, leather button holes, and fur on the outside. You could see why the Swiss had moved on.

Even today, I can visualize the blue-gray of the asphalt on that first day, when I made the left turn out of Edgewood Road and onto Route 133. This was the big road, and I could hear the big cars on it. I was frightened, and I was right to be. I hadn't bicycled since I was a child. I was slow and I wobbled. The shoulder--when there was a shoulder--was pocked with holes and littered with broken Heineken bottles.

A couple of miles out, I caught the left leg of my warm-ups in the chain. This stopped all forward motion, and I fell slowly, gracefully, into a gap in the middle of a lane of traffic. Scrabbling out of the way, I heard brakes and then a horn. "Who is this asshole?" they must have wondered. I wondered, too.

I made it, though. There were a lot of downhill stretches on the way from Ossining to the Reader's Digest. The ascents were gradual, almost forgiving. I took my shower and found my post at work. That afternoon, I hung my suit in my office closet and climbed back into my warm-ups. I dreaded the ride home. There was reason to dread it. The machine had 10 speeds all right, but you still had to pedal. At 5 feet 7 inches, I weighed 170 £ds. I'd been big and strong. I was still big. I couldn't make it even a third of the way up the first hill. I must have looked absurd. A fat man wearing green pajamas and walking an orange bicycle. And from a distance, it looked as if I had a dead animal tied to my shoulders.

I heard the cars driven by colleagues growling up behind me on the first steep ascent above the Saw Mill River Parkway. The road has many curves, and they were forced to wait for a chance to pass. And passing these same people in the hall, I'd see it in their eyes--recognition, a flicker of amusement, and then nothing.

I might have given up the plan immediately if I hadn't already spent $11 on that eyesore of a bicycle. I developed a wicked case of what veteran cyclists call "beginner's butt." If it didn't rain in the morning and dampen my shirt before work, then it rained in the afternoon and soaked the proofs I ferried home.

I'd watch the end of the local TV news and base my plans on the beaming meteorologist. I bicycled to work so often in the rain that I took to setting a clock radio and listening to the morning weather report. I still got wet. I kept setting the clock radio, but instead of listening to its buzzing prophecy, I'd step outside and smell the air, peer up at the sky.

Slowly, but decisively, my body began to change. A month went by. Maybe 2 months. Then one afternoon, without dismounting, I made it up that first hill. Within a week of that triumph, I was looking forward to the commute. Flying down Roaring Brook Road in Chappaqua one day, just after dawn, I was shocked to hear a cry of pleasure, a yodel really.

1. Strides: Running Through History With an Unlikely Athlete

2. Strides: Running Through History With an Unlikely Athlete

3. Strides: Running Through History With an Unlikely Athlete

4. Strides: Running Through History With an Unlikely Athlete