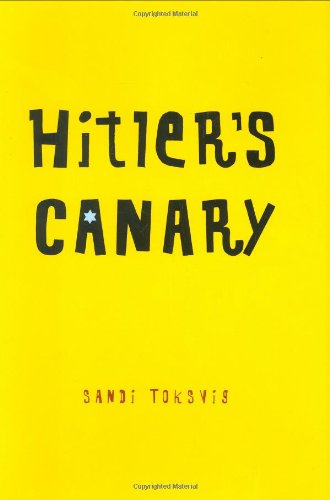 "My brother stood up so quickly he almost knocked Mama over. 'Why aren't you doing something? Do you know what the British are calling us? Hitler's canary! I've heard it on the radio, on the BBC. They say he has us in a cage and we just sit and sing any tune he wants.'"

Bamse's family are theater people. They don't get involved in politics. "it had nothing to do with us," Bamse tells us. Yet now he must decide: should he take his father's advice and not stir up trouble? Or should he follow his brother into the Resistance and take part in the most demanding role of his life?

Born in Copenhagen, Sandi Toksvig now lives in Britain. Her theater credits include seasons with the New Shakespeare Company at Regent's Park. She hosts "The News Quiz" TV show in London.

The day the Germans invaded I was asleep on Henry V's throne. It was 1940. I was ten and I was asleep on the throne in the middle of the stage at the Royal Copenhagen Theatre. I suppose it made it all seem even more dramatic. The real King Henry, of course, had been dead for a long time but I had seen my Uncle Max play him so often that I dreamed about Henry and his great battles. I imagined I was making wonderful speeches calling the soldiers to cry 'God for Harry, England and Saint George!' I knew the words:

. . . when the blast of war blows in our ears,
Then imitate the action of the tiger.

I had heard the speech a million times from the wings of the theatre. It was stirring stuff, even for a small Danish boy.

That night, 9 April, there had been a big party on the stage. All the actors had done little scenes and everyone had wept when my mother did her piece from Hamlet where the queen says that poor, mad Ophelia has drowned herself in the river. Even Torvald the comic cried and said Mama could move an onion to weep. Mama had bowed low and still for a moment and there was this tremendous hush. She knew she had everyone in the palm of her hand because she looked at me and winked. Then she stood up and gave the tinkling laugh that got such good reviews in her production of A Doll's House. It was as if all the sad bits had been a great joke and everyone felt better immediately. Remembering to laugh when things were bad was what Mama did best.

Father had painted a little congratulations card for everyone, with the red-and-white flags of Denmark spelling out their names. Thomas, who was wardrobe master, had provided fancy dress and there were kings and clowns, cowboys and Indians, courtiers and peasants, ballet dancers and stilt walkers and even two men from the electrics crew dressed as a cow. Thomas had found me a top hat and waistcoat and said I could be 'the little ringmaster'. I don't know what I must have looked like in the huge hat and my usual baggy grey shorts which came to my knee, but I thought it was great getting dressed up. The old season was over and everyone needed to relax a little. Soon there would be new plays, with hours of rehearsal and lots of tension and excitement, but for now it was time to have fun.

I loved the theatre and everything about it: the dusty smell, the old wooden boards where anything could happen, the excitement, the nerves, the showing off and the fun. From my mother I learned to love it when the place was full and the audience was hushed. My mother was an actress through and through. My father was in the theatre too but he was a designer and painter. From him I learned how wonderful it could be when the stage was empty, waiting for the next great set to be put up: that moment when the theatre could become anything from a sailing ship to a Bedouin desert. My father would stand on the stage and show me the drawings of the world he wanted to build.

'Look, Bamse,' he would say. 'Just imagine where we will take everyone next time.' He and I would stand there and create magic with his paints and brushes and imagination.

We lived in a make-believe world and it was hard for me to imagine doing anything else with my life. My mother was not just any actress. She was one of the most famous women in Denmark. She was what the Danish critics called 'a leading light'. Elegant and beautiful, she was brilliant at Chekhov, at comedy and, of course, at Shakespeare. Mama and Papa had met on stage and I had been hanging around the theatre since Mama had first carried me on in a music revue as the brand-new baby of a girl who had got into trouble. Then there was Uncle Max (who was not my real uncle but my godfather). Uncle Max was a wonderful actor and he and Mama had played every famous couple there was in the theatre. I sometimes think the audience thought they were married in real life, they were so good together. They could make you cry and laugh at the same moment. Maybe that's why we were so good at it once the war came.

On the night of the big party no one had been talking about politics. There was a war going on in Europe but so far Denmark had been left alone. I don't remember being afraid, even though in those days I was sometimes fearful of other things and slept with a light on. After everyone had done their party pieces we all sang old Danish songs. The Danes love singing and Uncle Max had written some new words specially for that night, making jokes and poking fun at everyone. My big brother Orlando, who was sixteen, and my fourteen-year-old sister Masha had gone home but I hid out of the way so as not to catch Mama's eye and make her realize how late it was. I had watched the grown-ups laughing and drinking beer. Then Thomas had put me on the throne and made me deliver one of Henry's speeches and everyone had clapped. I had fallen asleep on the throne with the sound still ringing in my ears.

When I awoke in the morning I wasn't sure where I was. The electricians had gone home. Perhaps they had walked through the streets of Copenhagen still dressed as a cow. A drunk cow heading home. Even at a party the backstage people never last as long as the actors. The men had turned out the lights except for the one safety lamp that always burns night and day in every theatre in the world. Now the whole stage was lit with a single bulb on a stand in the corner. The music had stopped but I wasn't alone. There were various sleeping bodies about the place, and Kaufmann, who played the piano for the sketches, seemed to have collapsed across the keyboard. None of the slumbering shapes looked like Mother or Father but I wasn't afraid. This was my home.