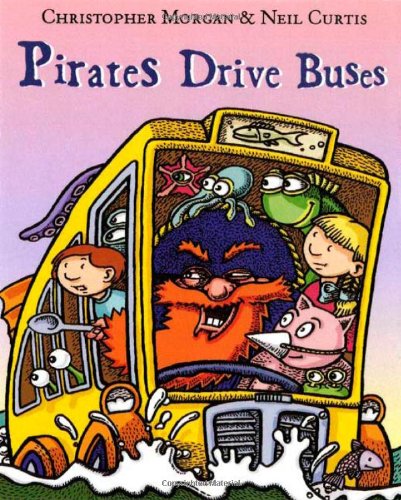 "OH, NO," SAID HEIDI.  "IT'S THAT PIRATE AGAIN."  IT SURE IS.  Newly-independent readers will welcome the pirate's return.

Billy and Heidi were walking to school when they heard the strangest sound. An odd bus stopped beside them, the door clattered open, and out leaped the pirate. “Great claws of crab! Didn’t you get my letter? I told you I was coming.” “A letter?” said Billy. “When did you send it?” “Ten minutes ago,” said the pirate. “Not to worry--you’re here now. And so am I. Now HURRY up!” In the pirate’s second visit (a follow up to Pirates Eat Porridge about which Kirkus said: ‘Fans of Lane Smith and Jon Scieszka will find lots to laugh at here.”), readers will happily jump in and join this outrageous bus tour.

Christopher Morgan has worked as a musician, a furniture maker, and a public servant. He lives in Melbourne, Australia.

Neil Curtis was an acclaimed, internationally exhibited artist. He illustrated many children’s books including Cat and Fish, which won the 2004 Children’s Book Council of Australia’s Picture Book of the Year Award. Curtis died in 2006.

Kirkus ReviewsBlister me eyebrows, the pirate from Pirates Eat Porridge (2007) is back. Breathless over-the-top humor from Down Under is the order of the day as siblings Heidi and Billy join their hirsute and logic-impaired friend on a wild bus tour. Joining the oceanic cast on the bus, the children find starfish, crawfish, octopus, the “parrot” who looks like a pig and a pirate named Frances Fallover. It’s hard to say just what’s going on in the wild bus ride, but new readers won’t care. They’ll just move from one nutty situation to another until the bus tour ends with a discovery of the pirate’s lost ship, the SS You Beauty. Wackiness is shored up with clear black-and-white illustrations and lots of repeated words and phrases. Nonsense abounds—but, as the pirate tells us, “Sense is for seagulls.” Kids too old for Mo Willems’s Pigeon books but who love the zaniness of Lane Smith and Dav Pilkey are the right readers for this series.  Booklist In this sequel to Pirates Eat Porridge (2007), siblings Billy and Heidi encounter their old pirate friend on their way to school. The pirate insists that the kids board his bus full of sea creatures and join him in his quest to recapture his ship, the SS You Beauty, which had been hijacked by monkey-crabs. Like the first book about Bill and Heidi, this sequel is filled with non sequiturs, silly word and animal combinations, and dialogue in which the volume is visually indicated by the type size. Middle-grade readers will appreciate the repetition of the magic word nincompoop, the key to Billy and Heidi’s escape from this energetic adventure. Those who haven’t read the first title may be a little confused by a few story elements, such as the parrot-pig, but the pace of the story line, even as it zigs and zags, will keep young readers going. Droll line drawings add to the humor. Full of nonsense, this Australian import will make readers, and listeners, laugh out loud. — Kathleen Isaac   School Library Journal

Gr 2-4–Billy and Heidi are on their way to school when their old friend from Pirates Eat Porridge (Roaring Brook, 2007) pulls up in a big yellow school bus loaded with assorted sea creatures–and one pig dressed as a parrot. The pirate demands that the kids come with him to find his missing ship, the S.S. You Beauty, stolen by a villainous crew of monkey-crabs. They overtake the swiped schooner, but are seriously outnumbered by the criminal crabs. It’s up to Billy and Heidi to figure out a way to get the ship back–preferably in time to get back to school. The frenetic action bounces breathlessly from one crazy event and weird setting to another, with little regard for logic or coherent plotting. The off-the-wall nonsensical dialogue is fun for a while, but quickly becomes overwhelming. Although transition readers may be attracted by the pirate theme and the wildly exaggerated black-and-white cartoon illustrations, this story is more silly than seaworthy.–Elaine E. Knight, Lincoln Elementary Schools, IL