Haidt, Jonathan The Happiness Hypothesis: Finding Modern Truth in Ancient Wisdom...Why the Meaningful Life is Closer Than You Think

The Happiness Hypothesis: Finding Modern Truth in Ancient Wisdom...Why the Meaningful Life is Closer Than You Think 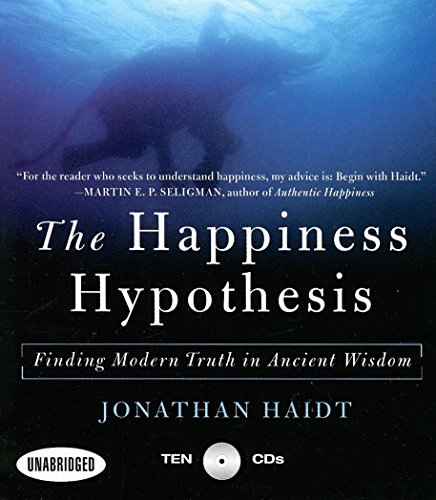 This is a book about 10 "Great Ideas". Each chapter is an attempt to savor one idea that has been discovered by several of the world's civilizations - to question it in light of what we now know from scientific research, and to extract from it the lessons that still apply to our modern lives.

Jonathan Haidt is a professor of psychology at the University of Virginia. His research examines morality, the moral emotions, and the intuitive foundations of politics and religion. He is the co-editor of Flourishing: Positive Psychology and the Life Well-Lived, and the author of The Righteous Mind: Why Good People are Divided by Politics and Religion. He lives in Charlottesville, Virginia.

From Chapter 6: Love and Attachments

No one can live happily who has regard to himself alone and transforms everything into a question of his own utility; you must live for your neighbor, if you would live for yourself. (Seneca)

No man is an island, entire of itself; every man is a piece of the continent, a part of the main. (John Donne)

In 1931, at the age of four, my father was diagnosed with polio. He was immediately put into an isolation room at the local hospital in Brooklyn, New York. There was no cure and no vaccine for polio at that time, and city dwellers lived in fear of its spread. So for several weeks my father had no human contact, save for an occasional visit by a masked nurse. His mother came to see him every day, but that’s all she could do – wave to him and try to talk to him through the glass pane on the door. My father remembers calling out to her, begging her to come in. It must have broken her heart, and one day she ignored the rules and went in. She was caught and sternly reprimanded. My father recovered with no paralysis, but this image has always stayed with me: a small boy alone in a room, looking at his mother through the glass.

My father had the bad luck to be born at the confluence point of three big ideas. The first was germ theory, proposed in the 1840s by Ignaz Semmelweis and incorporated into hospitals and homes with gradually increasing ferocity over the next century. Pediatricians in the 1920s came to fear germs above all else as they began to collect statistics from orphanages and foundling homes. As far back as records went, they showed that most children dropped off at foundling homes died within one year. In 1915, a New York physician, Henry Chapin, reported to the American Pediatric Society that out of the ten foundling homes he had examined, in all but one of them all of the children had died before their second birthday. As pediatricians came to grips with the deadly effects of institutions on young children, they reacted in a logical way by launching a crusade against germs. It became a priority in orphanages and hospitals to isolate children as much as possible in clean cubicles, to prevent them from infecting each other. Beds were separated, dividers were placed between beds, nurses retreated behind masks and gloves, and mothers were scolded for violating quarantine.

The other two big ideas were psychoanalysis and behaviorism. These two theories agreed on very little, but they both agreed that the infant’s attachment to its mother is based on milk. Freud thought that the infant’s libido (desire for pleasure) is first satisfied by the breast, and therefore the infant develops its first attachment (psychological need) to the breast. Only gradually does the child generalize that desire to the woman who owns the breast. The behaviorists didn’t care about libido, but they too saw the breast as the first reinforcer, the first reward (milk) for the first behavior (sucking). The very heart of behaviorism, if it had one, was conditioning – the idea that learning occurs when rewards are conditional upon behaviors. So unconditional love -- holding, nuzzling, and cuddling children for no reason -- was seen as the surest way to make children lazy, spoiled, and weak. Freudians and behaviorists were united in their belief that highly affectionate mothering damages children, and that scientific principles could improve child rearing. Three years before my father entered the hospital, John Watson, the leading American behaviorist (in the years before B. F. Skinner), published the best seller Psychological Care of Infant and Child. Watson wrote of his dream that one day babies would be raised in baby farms, away from the corrupting influences of parents. But until that day arrived, parents were urged to use behaviorist techniques to rear strong children: don’t pick them up when they cry, don’t cuddle or coddle them, just dole out benefits and punishments for each good and bad action.

How could science have gotten it so wrong? How could doctors and psychologists not have seen that children need love as well as milk? This chapter is about that need – the need for other people, for touch, and for close relationships. No man, woman, or child is an island. Scientists have come a long way since John Watson, and there is now a much more humane science of love. The story of this science begins with orphans and rhesus monkeys, and ends with a challenge to the dismal view of love held by many of the ancients, East and West. The heroes of this story are two psychologists who rejected the central tenets of their training: Harry Harlow and John Bowlby. These two men knew that something was missing in behaviorism and in psychoanalysis, respectively. Against great odds they changed their fields, they humanized the treatment of children, and they made it possible for science to greatly improve upon the wisdom of the ancients.