Items related to The Politically Incorrect Guide to the Presidents:...

Hayward, Steven F. The Politically Incorrect Guide to the Presidents: From Wilson to Obama

The Politically Incorrect Guide to the Presidents: From Wilson to Obama 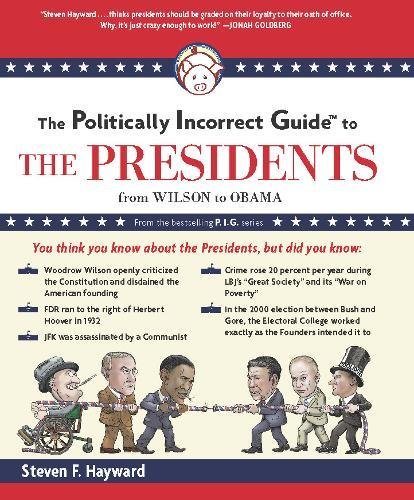 What Makes a President Great?

Academics, journalists, and popular historians agree. Our greatest presidents are the ones who confronted a national crisis and mobilized the entire nation to face it. That’s the conventional wisdom. The chief executives who are celebrated in textbooks and placed in the top echelon of presidents in surveys of experts are the bold” leaders the Woodrow Wilsons and Franklin Roosevelts who reshaped the United States in line with their grand vision” for America.

Unfortunately, along the way, these great” presidents inevitably expanded government and shrunk our liberties.

As the twentieth-century presidency has grown far beyond the bounds the Founders established for the office, the idea that our chief executive is responsible to preserve, protect, and defend the Constitution of the United States” has become a distant memory.

Historian and celebrated Reagan biographer Steven F. Hayward reminds us that the Founders had an entirely different idea of greatness in the presidential office. The personal ambitions, populist appeals, and bribes paid to the voters with their own money that most modern presidents engage in would strike them as instances of the demagoguery they most feared one of the great dangers to the people’s liberty that they wrote the Constitution explicitly to guard against. The Founders, in contrast to today’s historians, expected great presidents to be champions of the limited government established by the Constitution.

Working from that almost forgotten standard of presidential greatness, Steven Hayward offers a fascinating off the beaten track tour through the modern presidency, from the Progressive Era’s Woodrow Wilson to Barack Obama. Along the way, he serves up fresh historical insights, recalls forgotten anecdotes, celebrates undervalued presidents who took important stands in defense of the Constitution and points the way to a revival of truly constitutional government in America.

What you didn’t learn from your history teacher, but will find in The Politically Incorrect Guide™ to the Presidents:
Progressive hero Woodrow Wilson aired a pro Ku Klux Klan movie at the White House
Calvin Coolidge, much mocked by liberal historians as a bland Babbitt, was the last president to write his own speeches, guided the country through years of prosperity and limited government, and was one of the most cultured men ever to live in the White House
Why Eisenhower’s two biggest mistakes as president were, in his own words both sitting on the Supreme Court”
How as president JFK took mind altering drugs, many of them prescribed by a physician he called Dr. Feelgood,” who later lost his medical license for malpractice
Nixon’s hysterically vilified Christmas bombing of North Vietnam in 1972 caused very few civilian casualties and compelled North Vietnam to negotiate an end to the Vietnam War
The misunderestimated George W. Bush read 186 books during his presidency, mostly non fiction, biography, and history

Grading the presidents—by the Constitution

For a century after the founding, presidents routinely vetoed bills they believed unconstitutional and regularly spoke to the American people on the subject of constitutional government. But beginning with Woodrow Wilson in the Progressive Era, some chief executives have actively sought to undermine the Constitution, and in recent years many presidents have been negligent or simply ignorant about their constitutional responsibilities.

In The Politically Incorrect Guide™ to the Presidents, presidential historian Steven Hayward revives the original standard for judging our presidents. You’ll not only discover which presidents get an F on their efforts to preserve, protect, and defend the Constitution, but also learn about some of the underappreciated constitutional heroes who have been elected to the White House.

Along the way, you’ll also learn:
How the much ridiculed Calvin Coolidge was actually one of our most intellectual presidents, reading classics in the original Greek and Latin for relaxation at night in the White House
How Herbert Hoover, a strong anti-Communist, may have assured the success of the Bolshevik revolution in Russia
Why Eisenhower deliberately stumbled his way through his rare press conferences
How Barack Obama wanted to include Hiroshima and Nagasaki on his world apology tour, but the Japanese government said no thanks

Steven F. Hayward is the F. K. Weyerhaeuser Fellow in Law and Economics at the American Enterprise Institute, a senior fellow at the Pacific Research Institute in San Francisco, and the Thomas Smith Distinguished Visiting Professor at Ashland University. He holds a Ph.D. in American Studies and an M.A. in Government from Claremont Graduate School. Hayward has written for many scholarly and popular publications, including National Review, Reason, the Weekly Standard, the American Spectator, the Claremont Review of Books, Policy Review, the New York Times, and the Wall Street Journal. He is the author of The Real Jimmy Carter; Greatness: Reagan, Churchill, and the Making of Modern Statesmen; The Age of Reagan: The Fall of the Old Liberal Order, 1964–1980; and The Age of Reagan: The Conservative Counterrevolution, 1980–1989.

2. The Politically Incorrect Guide to the Presidents: From Wilson to Obama

3. The Politically Incorrect Guide to the Presidents: From Wilson to Obama Hayward, Steven F.