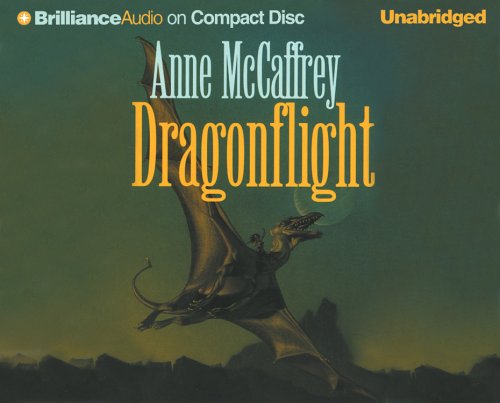 On the beautiful planet Pern, colonized for centuries, Land Holders and Craftsmen have traditionally tithed food and supplies to the dragonweyrs to which they are bound. In times past, the mighty telepathic dragons and their riders were the only protection from the dreaded, life-threatening Thread. But it has been over 400 years since the last Threadfall, and some people have come to doubt that the menace will every strike again. But F'lar, rider of Pern's greatest bronze dragon, has no such illusions. The Red Star is near; Thread will fall soon.

There are dragons all over Anne McCaffrey's house. Some she's bought, but many have been made for her by adoring fans and given to her as gifts. I don't make dragons, of course. But whenever circumstances allow, I do try to bring her American bacon, something she can't get easily in Ireland, and something which she has taught all her friends there to love, as well! I remember the first time I went to visit her, when she was still living in her old, much smaller but very homey, house. My husband and I arrived at the doorstep, and she immediately began bustling about, frying up some of the bacon we'd brought and sharing a lovely late breakfast with us before sending us off to the hotel for a nap. She made us dinner that night, too--the one and only time in my life that I've actually liked shrimp cocktail. Maybe that's because if you squint your eyes and look sideways, shrimp are kind of dragonlike, and I was eating them in the right company!
--Shelly Shapiro, Executive Editor

HOW CAN ONE GIRL SAVE AN ENTIRE WORLD?
To the nobles who live in Benden Weyr, Lessa is nothing but a ragged kitchen girl. For most of her life she has survived by serving those who betrayed her father and took over his lands. Now the time has come for Lessa to shed her disguise--and take back her stolen birthright.
But everything changes when she meets a queen dragon. The bond they share will be deep and last forever. It will protect them when, for the first time in centuries, Lessa's world is threatened by Thread, an evil substance that falls like rain and destroys everything it touches. Dragons and their Riders once protected the planet from Thread, but there are very few of them left these days. Now brave Lessa must risk her life, and the life of her beloved dragon, to save her beautiful world. . . .