Items related to Fair, Clear, and Terrible: The Story of Shiloh, Maine

Fair, Clear, and Terrible: The Story of Shiloh, Maine 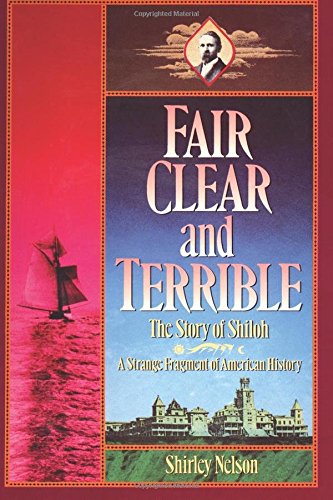 This bizarre, true story of a dynamic religious leader and his perfectionist followers gives insight into countless extremist movements today. At the turn of the century, a young man named Frank Weston Sandford, proclaiming himself the fulfillment of certain Biblical prophecies, founded a movement called Shiloh, its central location on a hill in the town of Durham, Maine. The movement's purpose was sweeping and ultimate - to prepare the world for the Second Coming of Christ and the cataclysmic events which would usher it in. The enactment of this mission spanned twenty-five years, involving many hundreds of people. Sandford, an appealing and volatile leader, erected an extraordinary complex of buildings in Durham, opened stations in major American cities, then set sail on the high seas in a racing schooner with a select group of followers. Their intention was to circle the globe for Christ. Instead, they headed for doom. As the movement expanded, so did its aspirations - and its dangers. The concept of itself as an apocalyptic force in the world exacted relentless personal demands. Rigorous fasts and purges kept members in a constant state of anxiety regarding their spiritual condition. While Sandford diverted funds to expand the effort to an international scale - England, Africa, Jerusalem - food and necessities became scarce on the Durham hilltop. Professional medical care was repudiated. Deaths began to multiply. In the court trials that structure the story, Sandford was finally convicted of manslaughter and sentenced to prison. Shirley Nelson, whose parents grew up in this unusual society, tells Shiloh's powerful story with passion, understanding, and grace. She captures the inner dimensions of an intense religious culture and deals poignantly with themes that remain current and haunting: authority, heroism, martyrdom - and the frightening phenomenon of one personality in control of many others.

Shirley Nelson won the Harper-Saxton Fellowship and the Friends of Literature award for fiction for the novel 'The Last Year of the War'.

The colony of Shiloh in southern Maine was a movement in miniature of 19th century American religious extremism. Led by Frank Sanford, self-proclaimed prophet of the Second Coming of Christ--a man who may well have had a personality disorder--this repressively anti-intellectual, patriarchal community set itself apart from the world until its "scattering" in 1920. Novelist Nelson ( The Last Year of the War ), a descendant of Shiloh residents, tells the grim story in numbing detail enlivened by an "insider's" zeal. Over its 25-year lifespan, as the mission expanded, the anxiety of the members about their spiritual worthiness was exacerbated by Sanford's purging tactics. Ravaged by disease and deprivation, the colonists perdured, even after Sanford's imprisonment for manslaughter.
Copyright 1989 Reed Business Information, Inc.

1. Fair, Clear, and Terrible: The Story of Shiloh, Maine

Book Description Wipf & Stock Pub, 2005. Condition: Good. A+ Customer service! Satisfaction Guaranteed! Book is in Used-Good condition. Pages and cover are clean and intact. Used items may not include supplementary materials such as CDs or access codes. May show signs of minor shelf wear and contain limited notes and highlighting. Seller Inventory # 1597521078-2-4

2. Fair, Clear, and Terrible: The Story of Shiloh, Maine