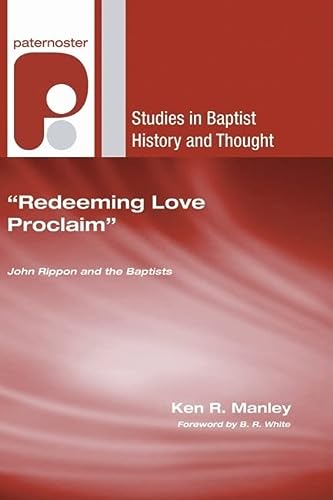 A leading exponent of the new moderate Calvinism that brought new life to many Baptists, John Rippon (1751-1836) helped unite Baptists during his lifetime. Reared in the West Country and trained at Bristol Academy, Rippon served for over sixty years at the London church where John Gill had been minister. Through his 'A Selection of Hymns from the Best Authors', Rippon exerted a powerful influence on Baptist worship and devotional life. Through his Baptist Annual Register (1790-1802), the denomination's first periodical, Rippon recorded the denomination's growing maturity, encouraged a strong missionary commitment, and promoted links between Baptists in Britain and America. With a keen sense of English Protestant history, which he helped preserve, and an active leadership in many Baptist organizations, Rippon helped conserve the heritage of Old Dissent and stimulated the evangelicalism of the New Dissent.

Ken R. Manley, Distinguished Professor of Church History at Whitley College, The University of Melbourne, retired as Principal of the College in 2000. He was a Vice-President of the Baptist World Alliance (2000-2005). His other books include, with M. Petras, 'The First Australian Baptists' (Sydney, 1981), 'In the Heart of Sydney: A History of Central Baptist Church 1836-1986' (Sydney, 1987), and "Redeeming Love Proclaim' John Rippon and the Baptists (SBHT vol 12, 2004).

"John Rippon, a prominent leader of the Evangelical Baptists in the late eighteenth and early nineteenth centuries, receives thorough scholarly appraisal in this book. Pastor, preacher, hymn writer and editor, Rippon displayed a global vision of the advance of the gospel." — David Bebbington, University of Stirling "John Rippon was one of the makers of the Baptist denomination, helping it to benefit from the new life of the Evangelical Revival. He helped to develop denominational consciousness and began to provide it with those agencies and instruments — periodical literature, hymn and tune books, the preservation of historical documentation and the promotion of itinerancy — which helped achieve this purpose. Ken Manley's fine study of this influential London minister uses biography to illuminate the life of the Particular Baptists at a turning point in their history." — John H. Y. Briggs, Regent's Park College, University of Oxford "I am personally thrilled about the publication of Ken Manley's doctoral thesis on John Rippon, who was one of the important Baptist figures of his day. It has proven to be one of the most valuable and most consulted pieces of Baptist scholarship, and now can reach an even broader audience." — Michael Haykin, Toronto Baptist Seminary and Bible College