Items related to The Breaking Point: How Female Midlife Crisis Is Transformin... 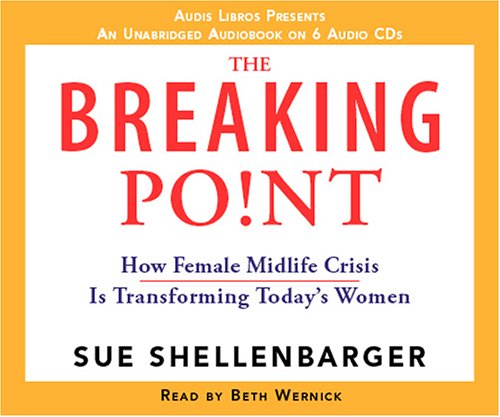 In the tradition of The Second Shift, a groundbreaking work that identifies and explains the phenomenon poised to redefine our culture.

When Sue Shellenbarger wrote about her midlife crisis in her award-winning Wall Street Journal "Work & Family" column, the volume and emotional intensity of the responses from her readers was stunning. As she heard story after story of middle-aged women radically changing course in search of greater fulfillment, a trend began to emerge: an entire generation of women was experiencing the tumultuous transition of midlife in ways not seen before.

To capture this paradigm shift, Shellenbarger combines original research data and interviews with more than fifty women who've navigated their own midlife crises. Long stereotyped as the province of men, today the midlife crisis is reported with greater frequency by women than men. Emboldened by the financial independence to act upon midlife desires, exhausted by decades of playing supermom and repressing the feminine sides of themselves to succeed at work, women are shedding the age roles of the past in favor of new pursuits in adventure, sports, sex, romance, education, and spirituality. And in the process they are rewriting all the rules.

Beyond defining a new phenomenon, The Breaking Point shows how various options women use to cope with the turmoil of midlife - from playing it safe to dynamiting their lives - have a profound impact on their families, careers, and our culture at large. Provocative, insightful, and resonant, The Breaking Point is sure to be one of the most controversial and talked-about publications of 2005.

Sue Shellenbarger is the creator and writer of the Wall Street Journal’s “Work & Family” column. The former chief of the Journal’s Chicago news bureau, Shellenbarger started the column in 1991 to provide the nation’s first regular coverage of the growing conflict between work and family and its implications for the workplace and society.

From The Breaking Point:
Like most people, I had never taken the notion of midlife crisis seriously. I thought of it as a fleeting, laughable period of adolescent regression that induces middle-aged men to buy red sports cars and take trophy wives. Typing with my arm in a sling after my ATV accident, I decided to make fun of myself in one of my regular Work & Family columns in The Wall Street Journal. Ridiculing one of the stupidest accidents of my life, I wrote, "The midlife crisis is a cliché-until you have one."

I quickly learned I was not alone. The column drew one of the biggest reader responses I had received in its twelve-year history. While some readers of both sexes were startled by the notion that a female could even have a midlife crisis, a far larger number of women readers experienced a shock of self-recognition. I did a little research and the statistics floored me: More than fifteen million women have had or will have a midlife crisis, as opposed to less than fourteen million men.

Clearly, I was on to something. Something big.