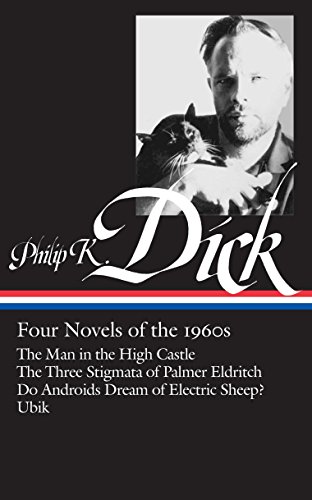 Known in his lifetime primarily to readers of science fiction, Philip K. Dick is now seen as a uniquely visionary figure, a writer who, in editor Jonathan Lethem’s words, “wielded a sardonic yet heartbroken acuity about the plight of being alive in the twentieth century, one that makes him a lonely hero to the readers who cherish him.”

This Library of America volume brings together four of Dick’s most original novels. The Man in the High Castle (1962), which won the Hugo Award, describes an alternate world in which Japan and Germany have won World War II and America is divided into separate occupation zones. The dizzying The Three Stigmata of Palmer Eldritch (1965) posits a future in which competing hallucinogens proffer different brands of virtual reality, and an interplanetary drug tycoon can transform himself into a godlike figure transcending even physical death.

Do Androids Dream of Electric Sheep? (1968), about a bounty hunter in search of escaped androids in a postapocalyptic society where status is measured by the possession of live animals and religious life is focused on a television personality, was the basis for the movie Blade Runner. Ubik (1969), with its future world of psychic espionage agents and cryonically frozen patients inhabiting an illusory “half-life,” pursues Dick’s theme of simulated realities and false perceptions to ever more disturbing conclusions, as time collapses on itself and characters stranded in past eras search desperately for the elusive, constantly shape-shifting panacea Ubik. As with most of Dick’s novels, no plot summary can suggest the mesmerizing and constantly surprising texture of these astonishing books.

Posing the questions “What is human?” and “What is real?” in a multitude of fascinating ways, Dick produced works—fantastic and weird, yet developed with precise logic, marked by wild humor and soaring flights of religious speculation—that are startlingly prescient imaginative anticipations of twenty-first-century quandaries.

Philip K. Dick (1928-1982) was the author of 36 novels and more than 120 stories, including such celebrated works as The Man in the High Castle and Do Androids Dream of Electric Sheep? (the basis for the film Blade Runner). He was inducted into the Science Fiction Hall of Fame in 2005.

Jonathan Lethem is the author Fortress of Solitude and many other novels and story collections.

Book Description Hardcover. Condition: New. Hardcover. This Library of America volume brings together four of Dick's most original, mesmerizing, and surprising novels: "The Man in the High Castle, The Three Stigmata of Palmer Eldrit.Shipping may be from multiple locations in the US or from the UK, depending on stock availability. 830 pages. 0.553. Seller Inventory # 9781598530094

7. Philip K. Dick: Four Novels of The 1960s / The Man in the High Castle / The Three Stigmata of Palmer Eldritch / Do Androids Dream of Electric Sheep? / Ubik (Library of America No. 173)