Items related to Fashioning Teenagers: A Cultural History of Seventeen... 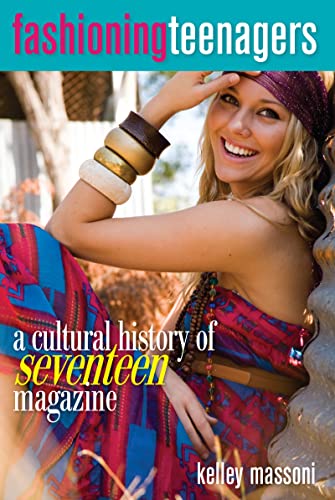 Founded in 1944 by Helen Valentine, Seventeen magazine was the first modern “teen magazine.” An immediate success, it became iconic in establishing the tastes and behaviors of successive generation of teen girls covering the last half of the 20th century. Kelley Massoni has written the first cultural history of the origins of Seventeen and its role in shaping the modern teen girl ideal. Using content analysis, interviews, letters, oral histories, and promotional materials, Massoni is able to show how Seventeen helped create the modern concept of “teenager.” The early Seventeen provided a generation of thinking young women with information on citizenship and clothing, politics and popularity, adult occupations and adolescent preoccupations, until economic and social forces converged to reshape the magazine toward teen consumerism. A chapter on the 21st century Seventeen brings the story to the present. Fashioning Teenagers will be of interest to students of popular culture, sociology, gender studies, mass media, journalism, business, and American studies.

kelley massoni, Ph.D., is a lecturer in sociology at the University of Kansas.

“This book will make a major contribution to our understanding of gender roles, culture, consumerism, and media in the 20th and 21st centuries.”

“This book offers a fascinating study of the role Seventeen magazine has played in turning teen age girls into full fledged members of American consumer culture. The discussion of the magazine and its advertising’s impact on the ideas of teenagers and young women about beauty and fashion is both perceptive and highly alarming.”

“Kelley Massoni has been indefatigable in seeking out information about Seventeen's creators and the details of their struggle to create a magazine that would address girls and workers and citizens as well as consumers. Her telling of that story is irresistible -- infused with energy and sparkling with insights about how the gender, class and race politics of the times get played out from the workplace to the market place to the pages of the magazine itself. This book is a must-read for anyone interested in gender and popular culture. More than that, it will entertain and enlighten anyone who used Seventeen as a model for how to be a real teenager.”

“Kelley Massoni has produced a masterful work ---a critical but fair review of all that brought Seventeen to life and above all the clarity of its creators' editorial commitment. I was overwhelmed by her interpretation of corporate machinations, as well as by her understanding of the role I played in what the new generation calls ‘branding.’ Fashioning Teenagers is a fascinating story and a timely one."

"Sociologist Massoni (Univ. of Kansas) offers the first book-length study of the most important teen magazine ever.  It covers mostly the early years, from the founding of Seventeen in 1944 to the forced resignation of its first editor, Helen Valentine, in early 1950, and much of the book takes the form of a detailed comparison of the magazine’s content in 1944/45 and 1949/50....  The cultural and social history that underlies the book – e.g. the postwar resurgence of the ideal of domesticity – is well known.  Massoni’s major themes, including youth consumerism and the construction of the female body by advertisers ... will interest students of youth culture, consumerism, advertising, and postwar gender roles.  Summing up: Recommended.  Upper-division undergraduates and above."

“Kelley Massoni offers insight into the first six years of what was meant to be a service and fashion magazine for teenagers growing up in the throes of a war-driven economy. Since then, Massoni argues, Seventeen has come to represent a culture in which teens are not only 'consumers but also the consumed.'... the book offers a cultural narrative that transcends time and is a useful resource for both scholarly and classroom purposes.”
—Miglena Sternadori, Journal of Magazine & New Media Research

“What’s interesting about Massoni’s approach is that she simultaneously traces the magazine’s history while describing the behind-the-scenes internal politics that took place at Seventeen.... Fashioning Teenagers: A Cultural History of Seventeen Magazine is likely to appeal to those interested in magazine history, as this particular magazine led the charge in the creation of the host of teen-oriented publications that followed. It also may appeal to those interested in learning more about advertising, marketing, and promotion, as it shows how creative advertising and promotional techniques can really make a difference in influencing consumer trends.”
—Andi Stein, The Association for Education in Journalism and Mass Communication

“Through careful analysis of archival data and biographical interviews with former staffers, Massoni traces the development of Seventeen and illustrates how the magazine’s content reflected the contradictions of the progressive age.... Massoni documents how the content in Seventeen increasingly complemented the advertiser’s ideal image of the teen girl consumer. A look at the modern pages of Seventeen shows quite clearly the staying power of such a symbiotic relationship. Massoni provides important insight into how consumerism shaped the image of the modern teenager and reveals the alternative path that might have been possible. The book will be of interest to those interested in consumer culture, gender, and media studies, and could be used to supplement undergraduate instruction on the social construction of the lifecourse.”
—Contemporary Sociology

Shipping: US$ 18.18
From United Kingdom to U.S.A.
Destination, rates & speeds

Shipping: US$ 7.88
From United Kingdom to U.S.A.
Destination, rates & speeds