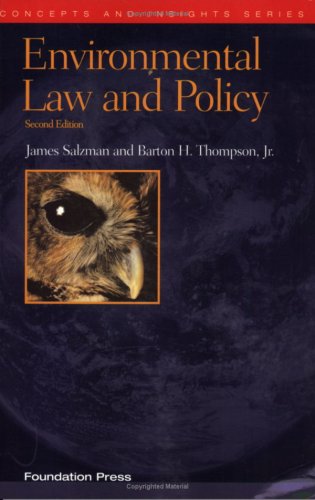 The first part of the book provides an engaging discussion of the major themes and issues that cross cut environmental law. Starting with the first chapter s brief history of environmentalism in America, the second chapter goes on to explore the importance and implications of basic themes that occur in virtually all environmental conflicts, including scientific uncertainty, market failures, problems of scale, public choice theory, etc. It then presents three dominant perspectives in the field that drive policy development environmental rights, utilitarianism, and environmental justice. Chapter Three fills in the remaining legal background for understanding environmental protection, reviewing the theory of instrument choice, the basics of administrative law, core concepts in constitutional law (e.g., takings, the commerce clause), and the doctrines associated with how citizen groups shape environmental law such as standing.The second part of the book examines the substance of environmental law, with separate sections on each of the major statutes. International issues such as ozone depletion, climate change, and transboundary waste disposal are also addressed. These chapters build on the themes and conceptual framework laid down in the first part of the text in order to integrate the discussion of individual statutes into a broad portrait of the law.