Items related to Beyond Matter: Why Science Needs Metaphysics 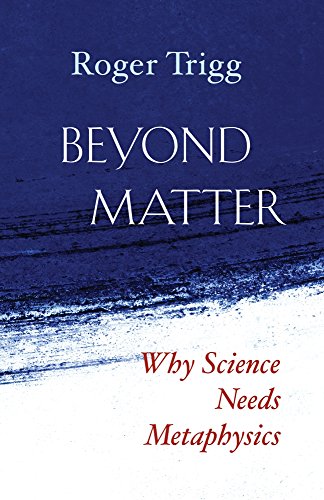 Does science have all the answers? Can it even deal with abstract reasoning which reaches beyond the world experienced by us? How can we be so sure that the physical world is sufficiently ordered to be intelligible to humans? How is it that mathematics, a product of human minds, can unlock the secrets of the physical universe? Are all such questions to be ruled out as inadmissible if science cannot settle them?
Metaphysics has traditionally been understood as reasoning
beyond the reach of science, sometimes even claiming realities that are beyond its grasp. Because of this, metaphysics has often been contemptuously dismissed by scientists and philosophers who wish to remain within the bounds of what can be scientifically proven. Yet scientists at the frontiers of physics unwittingly engage in metaphysics, as they are now happy to contemplate whole universes that are, in principle, beyond human reach.
Roger Trigg challenges those who deny that science needs philosophical assumptions. In fact, Trigg claims that the foundations of science themselves have to lie beyond science. It takes reasoning apart from what can be experienced to discover what is not yet known, and this metaphysical reasoning to imagine realities beyond what can be accessed.
“In Beyond Matter, Roger Trigg advances a powerful, persuasive, fair-minded argument that the sciences require a philosophical, metaphysical foundation. This is a brilliant book for new-comers to philosophy of science and experts alike.” —Charles Taliaferro, professor of philosophy, St. Olaf College

Roger Trigg is emeritus professor of philosophy at the University of Warwick, senior research fellow at the Ian Ramsey Centre, University of Oxford and a long-standing member of St Cross College, Oxford. He is a former president of the Mind Association, and was the founding president of the British Philosophical Association, representing all British philosophy. The author of many books on central philosophical topics, he has been an opponent of relativism in all its forms.
His most recent book is Religious Diversity: Philosophical and Political Dimensions (Cambridge University Press, 2014), but much of his writing has focused on issues arising from the philosophy of science, including Rationality and Science (Wiley-Blackwell, 1993).

“In this important book, the philosopher Roger Trigg sets out to honour the sciences by not letting them be shouldered with burdens they cannot bear, such as being the arbiter of all truth. Trigg opposes scientism, arguing that we cannot ‘arbitrarily' dismiss ‘swathes of human reasoning and experience,’ reflected in disciplines such as literature or theology, simply on the grounds that they are not physics.” —Andrew Davison, Times' Literary Supplement

“Trigg is an eminent philosopher and now Senior Research Fellow at the Ian Ramsey Center at Oxford. If you’re concerned about the ‘science only’ approach . . . this one is a helpful corrective.” —Jim Stimp, BioLogos

"This book, for newcomers to the field of philosophy of science and those already immersed in the debates, is superb." —CHOICE

“Thoughtful and well-reasoned. . . . Beyond Matter has the potential to transcend academia, thanks to its friendly tone and willingness to address atheism in a noncombative way—a rarity in works along the science-philosophy divide. In an age when belief and research seem pitted against one another, this book is a welcome window of bipartisan sanity. Ideal for researchers and thinkers, but also a good pick for interested armchair philosophers.” —Anna Call, Foreword Reviews

“As always, Trigg’s writing is clear and his argumentation easy to comprehend. He introduces a number of philosophical debates in science without getting too entangled in details." —Lari Launonen, ESSSAT News and Reviews