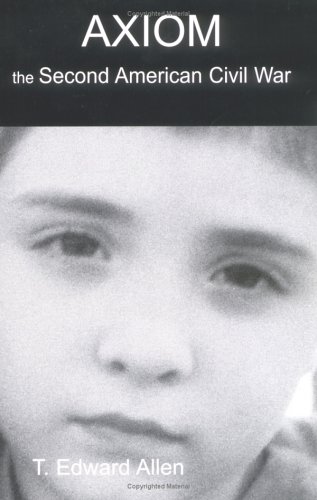 AXIOM, the Second American Civil War. Through corruption, greed and incompetence, the Neo-Cons have brought the world to the brink of World War III. John Carter and his family are caught in the middle of a terrifying plunge into chaos. When the World economy collapses, America is brought down with it. The focal point is the ideological conflict between Progressives and Conservatives and when civil war breaks out, Americans find that every axiom they took for granted has been overturned.

At Spectrecom Publishing, we believe the first amendment is one of our most important and fundamental rights and we prove it by publishing the new blockbuster AXIOM, the Second American Civil War by T. Edward Allen.

I would like to say to my critics that "I got you"!! Of course the character John Carter is an A__hole, of course he screams at the TV, of course he is angry at what is happening! There are no other characters developed because John is a loner and that's not the point, you simple minded critic want-a-be's! Read more books! Jeez... Guess what... There are a lot of John Carters out there ready to explode. If you don't like my writing style, too bad! I wrote AXIOM to read like a movie, disjointed and tragic, violent and disgusting, and as realistic as possible. That is the way it will be here in the future if the Neo-Con fascist mad men are not stopped. AXIOM becomes more prophetic everyday that passes! Finally, most of the typos were caused by the conversion from PC Word to Mac PDF which were missed by the printer, I appologize for that only...