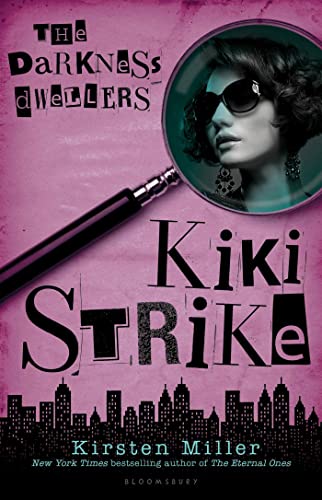 First they ventured deep under New York to save the city itself.

Then things got personal as the Irregulars ventured into a haunted mansion in Chinatown to uncover an evil twin.

Now, in the third installment of bestselling author Kirsten Miller's Kiki Strike series, this delightful group of delinquent geniuses jump feet first into a fast-paced international pursuit, going underground in Paris to pursue a pair of treacherous royals who have killed Kiki's parents.

With a dash of romance, a fresh take on good manners, and loads of butt-kicking bravery, Kiki, Betty, Ananka and the other Irregulars sharpen their amazing skills in this highly anticipated new adventure.

KIRSTEN MILLER grew up in a small town in the mountains of North Carolina. At seventeen, she hit the road and moved to New York City, where she lives to this day. She is the author of two other Kiki Strike books, as well as the bestselling The Eternal Ones and All You Desire.
www.kikistrike.com

Kiki Strike, aka Katarina, Princess of Pokrovia, is headed back to Pokrovia to give up her crown since the country can now be deemed a democracy. But her spoiled cousin and evil aunt have other plans. In a second, equally strong plot, Betty Bent is accompanying the elderly, straitlaced head of L’Institut Beauregard to Paris to uncover the remains of her former lover. It’s another subterranean adventure for the Irregulars, once again narrated by Ananka Fishbein, who this time is struggling with the mantle of leader while Kiki is overseas. Crushes, tragic love lost, and real danger make for a strong third entry in the Kiki Strike series. Grades 5-8. --Frances Bradburn