Items related to King For Kids: School and Family Edition 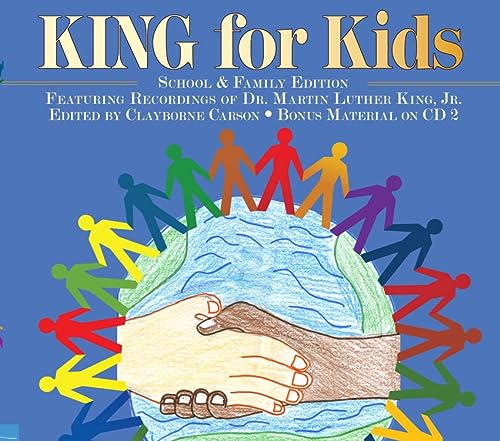 For the first time, an edition of Martin Luther King's most important speeches and selected sermons are assembled specifically for school-age-children and families to listen to together.
Dr. Martin Luther King, Jr., is known for being one of the greatest orators of the 20th Century, and perhaps in all of American history. In the 1950s and 1960s, his words led the Civil Rights movement and helped change society. Though his speeches refer to the conditions of the 1960s, his assertions that nonviolent protest is the key to democracy and that all humans are equal, are as timeless and powerful today as they were nearly forty years ago. To honor Dr. King, this edition includes Dr. King's recordings, abridged for children, and is commemorated with selected art from our nation's own talent.

Martin Luther King, Jr. (January 15, 1929 - April 4, 1968) was a famous leader of the American civil rights movement, a political activist, and a Baptist minister. In 1964, King became the youngest man to be awarded the Nobel Peace Prize for his work as a peacemaker, promoting nonviolence and equal treatment for different races. On April 4, 1968, Dr. King was assassinated in Memphis, Tennessee. In 1977, he was posthumously awarded the Presidential Medal of Freedom by Jimmy Carter. In 1986, Martin Luther King Day was established as a United States holiday. Dr. King often called for personal responsibility in fostering world peace.King's most influential and well-known public address is the "I Have A Dream" speech, delivered on the steps of the Lincoln Memorial in Washington, D.C.

KING FOR KIDS is a misleading title; this recording could well be entitled KING FOR EVERYONE: AN ESSENTIAL INTRODUCTION TO MARTIN LUTHER KING, JR. As one narrator remarks, for those who do not have personal memories of this man, this collection bears witness to the period and the person. Hearing each of Martin Luther King, Jr.Õs, speeches as one in a continuum calls attention to his passions and concerns, and underscores his oratory style. The introductions by distinguished Americans, including George McGovern, Coretta Scott King, and Andrew Young, provide historical perspective and background for each speech. From the Montgomery Improvement Association meeting to the Memphis Mason Temple meeting, KingÕs speeches are remarkable. A.R. Winner of AudioFile Earphones Award © AudioFile 2008, Portland, Maine-- Copyright © AudioFile, Portland, Maine

Book Description Hachette Audio, 2008. AudioCD. Condition: Good. 1 AUDIO CD in the clamshell case withdrawn from the library collection. Library sticker and marking to the case and the CD. Some shelf wear to the box. The AUDIO CD is in an individual slot, protected and clear sounding. Enjoy this AUDIO CD performance!. Seller Inventory # sparkle41512254