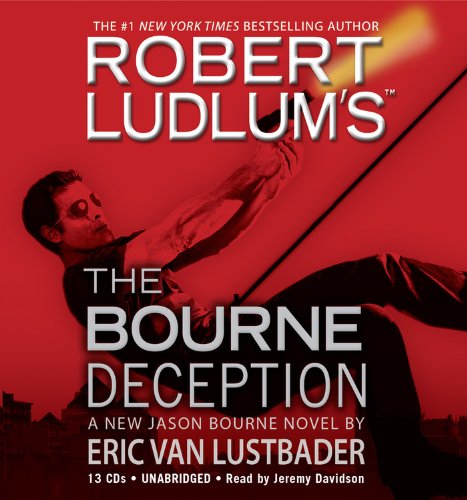 The Bourne Deception picks up where The Bourne Sanction left off. Jason Bourne's nemesis Arkadin is still hot on his trail and the two continue their struggle, reversing roles of hunter and hunted. When Bourne is ambushed and badly wounded, he fakes his death and goes into hiding. In safety, he takes on a new identity, and begins a mission to find out who tried to assassinate him. Jason begins to question who he really is, how much of him is tied up in the Bourne identity, and what he would become if that was suddenly taken away from him. Meanwhile, an American passenger airliner is shot down over Egypt by what seems to be an Iranian missile. A massive global investigative team is assembled to get at the truth of the situation before it can all escalate into an international scandal. Jason Bourne's search for the man who shot him intersects with the search for the people or the group that brought down the airliner, which leads Bourne into one of the most deadly and challenging situations in his entire life. With the threat of a new world war brewing, Bourne finds himself in a race against time to uncover the truth and find the person behind his assault, all the while being stalked by his unknown nemesis.

ROBERT LUDLUM was the author of twenty-one novels, each one a New York Times bestseller. There are more than 210 million of his books in print, and they have been translated into thirty-two languages. He is the author of The Scarlatti Inheritance, The Chancellor Manuscript, and the Jason Bourne series--The Bourne Identity, The Bourne Supremacy, and The Bourne Ultimatum--among others. Mr. Ludlum passed away in March, 2001.

ERIC VAN LUSTBADER is most widely known as the New York Times bestselling author of twenty international bestselling thrillers including Ninja and Black Heart. He is also the author of two successful and highly regarded series of fantasy novels, The Sunset Warrior Cycle and The Pearl Saga. His novels have been translated into over twenty languages. Lustbader was born and raised in Greenwich Village. He and his wife, Victoria, have been residents of the South Fork of Long Island for more than fifteen years.

Realistic sound effects and an exciting musical score enhance this reading of Eric van Lustbader's fourth "Bourne" novel, the seventh novel in the series, including the three original titles by Robert Ludlum. Jason Bourne, superspy in search of his past, goes head-to-head with his evil counterpart in an international thriller involving a military independent contractor and an apparent attack by Iranians on a civilian airliner. The story, which at times is almost mystical, will entertain listeners even though it lacks the soul and refined plotting of the Ludlum trilogy. But Jeremy Davidson's reading is strong, and as said above, the music and sound effects that run throughout add to the experience. S.E.S. © AudioFile 2010, Portland, Maine