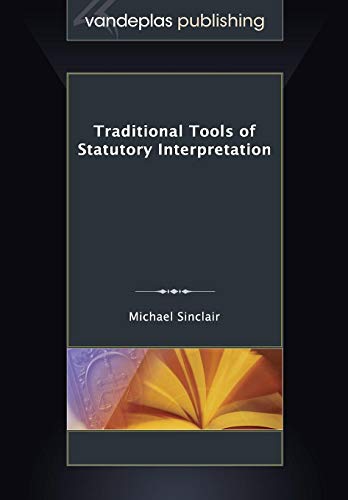 Statutes are now the predominant source of law in our society, the primary resource for legal decisions in all kinds and at all levels of legal practice. This book is about the process of making and justifying legal decisions based on the interpretation and application of statutes. It introduces and explains the methods of interpretation ¬-the "traditional tools of statutory interpretation" as Justice Stevens called them -used ¬by legal professionals in interpreting and applying statutes. It covers techniques such as precedent, relation to context, canons of construction, and more contentiously, legislative history. The focus is on explanation and justification with the aim of conveying the sort of understanding that will enable the reader to analyze novel cases and evaluate unfamiliar arguments. About the author: Michael Sinclair, Professor Emeritus of New York Law School, is a native of New Zealand where he received his early education, a B.A. (Economics), B.A. Hon's. (First class in philosophy), and a Ph.D. in Philosophy, writing a dissertation on Ludwig Wittgenstein, "Language Games and Forms of Life." In 1974, with the aid of a Fulbright Fellowship, he followed a girl to the United States, where he studied logic and grammar for two years before going to law school. They are still married and have one daughter, a musician. He received a J.D. (magna cum laude, Order of the Coif) from the University of Michigan Law School in 1978 and after three years in practice began teaching in 1981. He taught and wrote in a variety of subjects -contracts, torts, commercial law, intellectual property, banking, jurisprudence, wills and trusts, administrative law, and statutory interpretation -before retiring in 2012. He and his wife Karen, an anthropologist, live in Northport, near the tip of Michigan's Leelanau Peninsula.