Items related to Worth the Wait: Tales of the Phillies 2008 Championship...

Stark, Jayson Worth the Wait: Tales of the Phillies 2008 Championship Season

Worth the Wait: Tales of the Phillies 2008 Championship Season 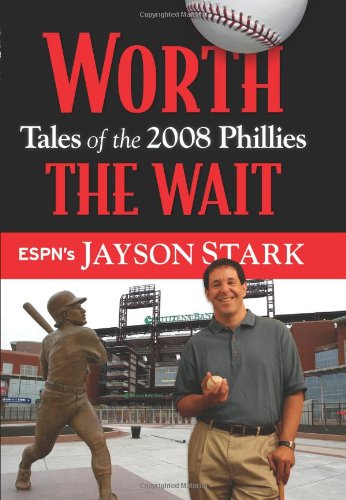 For 25 years, Philadelphia waited for a team like the 2008 Phillies to come along. Waited for a team that could end the longest title drought of any city in America that fields teams in all four najor professional sports. Waited for that one magical postseason run that could unleash a quarter-century of pent-up frustration. And then these '08 Phillies hopped on that magic carpet and made it happen. They roared from behind in the last two weeks of September to overtake the Mets. They wiped out CC Sabathia and the Brewers in the National League Division Series. They did in Manny Ramirez and the Dodgers in the National League Championship Series. Then, finally, they survived the Rays--and Bud Selig's attack of the rain gods--to win the World Series, in a rain-delayed, three-and-a-half-inning grand finale unlike any other finish in World Series history.

That championship run was more than just the end of their city's interminable sports nightmare. It was vindication for a group of men whose fans had once decided wouldn't win, couldn't win, didn't know how to win. For Charlie Manuel, the countrified manager who overcame years of derision--and personal October tragedy--to become a certified Philadelphia hero. For shortstop Jimmy Rollins, the outspoken face of the franchise, a man who dared to speak openly of rewriting his team's tortured history. For Pat Burrell, the former No. 1 overall pick who had been a Phillie longer than any of them. For Brett Myers, their Opening Day starter who had been banished to the minor leagues in midseason and returned a new man--not to mention a man who was about to become October's least likely offensive dynamo.

This was a team built around a compelling cast of characters: ultra-cool emerging ace Cole Hamels; 45-year-old left-hander Jamie Moyer, who led the team in wins; energetic center fielder Shane Victorino, who somehow turned into a villain in laid-back L.A.; and Brad Lidge, a closer who finished off a perfect season with one last perfect pitch. Before they came along, the Phillies had won only one World Series in 125 seasons. But unlike so many Phillies teams that were haunted by that history, this team was inspired by it, by the chance to place its own inimitable stamp on the franchise. And as the 2 million people who attended their championship parade can attest, it was worth the wait.

"It was an amazing season and a great year for the city of Philadelphia. Jayson has been such a big part of covering Philadelphia sports for so many years. It seems appropriate that he wrote this book and put the memories of 2008 on paper for baseball fans everywhere to enjoy."
--Phillies pitcher Jamie Moyer

"Jayson has always been just what Philadelphia needed: attention to detail with a light-hearted twist. If you want to understand everything that led to Philadelphia's triumphant return to baseball's crown and why it is a full reversal of fate, not just a good team on a good year, look no further."
--New York Times columnist Doug Glanville

"I'm the guy who once taught Jayson Stark his most important lesson in life: `Make the stats work for you.' But this book proves that what he really learned was to make the words work for him. If anybody was the write person to do this book on the 2008 Phillies, it was Jayson."
--Phillies broadcaster Larry Andersen

"It is no exaggeration to say that of all the sports journalists in America, only Jayson Stark could capture what the 2008 Phillies accomplished and put it in its fullest context."
--Longtime Philadelphia sportswriter and broadcaster Ray Didinger

Jayson Stark covers baseball for ESPN and ESPN.com. Just as importantly, he is also a lifelong Philadelphian who understands that sports in his hometown is a priority that ranks above inhaling, exhaling, and soft-pretzel eating. Before he joined ESPN.com as a senior writer in 2000, he worked at the the Philadelphia Inquirer for 21 years, where he reported on the Phillies, served as a national baseball columnist, and witnessed the Phillies' first World Series triumph, in 1980, with his own eyes. He also has been a columnist for Baseball America for more than two decades. His first book, The Stark Truth: The Most Overrated and Underrated Players in Baseball History, was published by Triumph Books in 2007. He lives in suburban Philadelphia with his wife, Lisa, and three children, Steven, Jessica, and Hali.

1. Worth the Wait: Tales of the Phillies 2008 Championship Season

3. Worth the Wait: Tales of the Phillies 2008 Championship Season

4. Worth the Wait: Tales of the Phillies 2008 Championship Season Stark, Jayson

5. Worth the Wait: Tales of the Phillies 2008 Championship Season Stark, Jayson