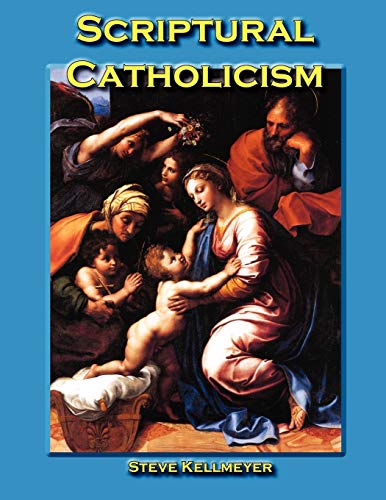 The acclaimed CLASSIC apologetics text is BACK! Would your children like to know where the Assumption of Mary can be found in Scripture? Is Maccabees the only Scriptural support for Purgatory? Where can indulgences be found? No matter which book you looked at, none of them had all the answers - until now. Scriptural Catholicism* assembles the Scriptural underpinnings for nearly six dozen teachings of the Catholic Church. It provides not just two citations for Purgatory, but two dozen; not just a page of Scripture for Mary, but twenty pages; and the Scriptural basis not just for indulgences, but common Catholic prayers as well. With over 2500 Scripture verses in 1400 separate citations, arranged by topic and interspersed with concise, accurate commentary which demonstrates how Scripture forms the teaching, Scriptural Catholicism is a necessary reference work for anyone who wants to learn more about the Scriptural foundations of the Catholic faith. In addition, Scriptural Catholicism provides the dogmatic interpretations of all Scripture passages defined by the Church, who pronounced the definitions and when. Essays on the canon of Scripture, the role of Scripture within the Church, and short excerpts from the Church's own Magisterial documents on Scripture complete this excellent compendium. Read what others have to say... "I highly recommend this very thorough compilation of biblical data on Catholic beliefs, not only for Catholics who wish to know how to defend their faith biblically, but for non-Catholics who insist on asking the question, "Show me where in Scripture it teaches that ...?!" Mr. Kellmeyer's brief commentaries and explanations of Catholic perspectives on issues like the authority of Scripture and Tradition are also very sensitively and accurately written. This resource should prove to be a very helpful companion to other apologetic resources, such as William Jurgen's Faith of the Early Fathers." - Marcus C. Grodi, Director, The Coming Home Network International "'Sola Scriptura' was a theological novelty when it first appeared at the time of the Protestant Reformation; its more extreme form in contemporary Fundamentalism is even more of an anomaly. That said, Steven Kellmeyer has done an admirable job of buttressing every major doctrine and practice of Catholicism not only with individual Scripture quotes but with the entire sense of Sacred Scripture." - Father Peter Stravinskas, Editor, The Catholic Answer *Scriptural Catholicism received the imprimatur from James A. Griffin, Bishop of Columbus, August 3, 1998