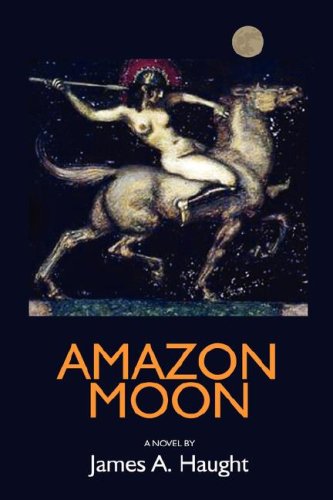 In ancient Greece, male supremacy made most women servants, slaves or concubines. Yet Greek art depicted bold, free, fighting females. Amazons were spirited women who fled to be rebels, according to this account by a captured scribe.

James A. Haught was born in a rural West Virginia town with no electricity. By chance, he became a newspaper reporter and now is editor of the state's largest paper, The Charleston Gazette. He has won 19 national newswriting awards. He has written six nonfiction books and 60 magazine essays.

"Sing out. Hup, ho. Roll her over in the clover. Make her laugh. Make her cry. Make a baby bye and bye."

The brawny Greek warriors chanted to liven their march in late-summer heat up the wide Thermodon Valley south of the Black Sea. They were an elite troop, deadly fighters, expert with sword, bow, ax, javelin and mace. Killing is the occupation of soldiers, and they were masters of their craft. They were battle-tested, hardened to shrieks of death, renowned for combat spirit. "Fire from Zeus," declared their platoon flag bearing a lightning bolt.

All the soldiers had been proclaimed patriotic heroes by the Kavopolis Assembly for their part in a gory victory over Dorians. They were equipped with the finest iron swords forged at the Chalcis foundry on the island Euboea, and with the strongest bows made of horn: state-of-the-art killing instruments. The unit contained seven horseback lancers, thirteen archers, twenty foot-soldiers, a camp cook and a supply wagon, all under leadership of hawk-faced Commander Patros.

The warriors were on a search-and-destroy mission. From spy intelligence, they knew the concealed location of their target, a secret colony of rebels hidden in an isolated side-valley. The mouth of that valley was overgrown by an impenetrable thicket of thorn trees and vines. The spot appeared to be lonely wilderness. But the spy report disclosed that, beside a cliff at one edge of the ravine, tree branches could be pulled aside, revealing a narrow lane into the enclave. Also, the report said, occupants of the hidden colony always kept a sentry posted on a ledge above the cliff, lest outsiders discover the unknown sanctuary.

Commander Patros rode at the front, tall on a high black steed, a stiff figure of authority. From a rich family, he exuded the confidence of rank, social and military. Approaching a riverbend, he swung his horse and squelched the chanting.

"Silence among the troops."

The commander led the unit off the trail into the screen of trees. The men threaded the forest quietly until Patros waved a halt. He dismounted and peered between trunks at an overgrown side-valley barely visible ahead. He summoned a wiry archer he had selected for a stealthy task, and instructed him carefully:

"Don't approach directly or you will be seen. The sentry will sound an alarm and we will lose the element of surprise. Instead, climb the intervening hill, cross the ridge, and descend silently from above, unseen. After the sentry is removed, signal us and we will advance."

The archer checked his weaponry, test-pulled his bowstring, saluted, and hastened toward the hill. Grass of the valley floor was baked dull but foliage on the hillsides remained lush. The bowman stayed within the cover of bushes as he crept to the top, then quietly descended the opposite slope.

The sentry, a young Amazon, was bored from staring at the still ravine. Day after day she had served her shift on the clifftop ledge without even a passing squirrel to break the monotony. Around her neck, suspended by a leather thong, was a trumpet crafted from a ram's horn. In event of intruders, she was to sound it and run down the path to the village, blowing as she went, to alert the whole Amazon colony. But the trumpet never had been blown, neither by her nor others taking their turns on watch.

The sentry's hair was honey color, unlike the black locks of most Mediterranean people, indicating that her ancestors had been Slavs from the north. In the sultry heat, she wore the briefest tunic. She paced back and forth on the ledge, restless. She watched a spider string its web between branches of a bush. She scratched and fidgeted. She stretched and yawned. She was in mid-yawn when the arrow pierced her heart. She looked astonished and clutched the shaft protruding between her breasts. She tried to gasp but couldn't breathe. Her knees buckled. She fell onto the front of the ledge and tumbled down the cliff.

Moments later, the archer emerged into the Thermodon Valley sunshine and waved to the waiting platoon. Commander Patros signaled the advance. The warriors left the woods, approached the side-valley, and carefully entered the hidden lane by the cliff. They passed the twisted body of the sentry, her arms and legs skewed oddly.

The Greek fighters neared the upstream edge of the thicket. Through branches they glimpsed the colony, the secret village of Amazons. Some women splashed nude in a dammed creek. Others cooked in doorways. In vegetable gardens, male slaves hoed under female supervision. A few girl children were seen.

Hidden by greenery, Patros quietly arrayed his warriors for the attack. Horsemen readied their lances. Archers fitted arrows to strings. Foot soldiers drew their swords and adjusted their shields. Silently the commander raised his arm to launch the surprise assault.