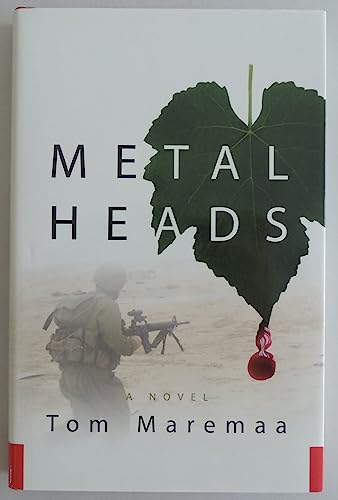 In a military hospital for wounded veterans of the Iraq war, ex-Marine Jeremy Witherspoon, called Spoon by his comrades, is trying to come to terms with his life-changing injuries. The hospital specializes in treating "metal heads," those with severe head trauma whose injuries require the insertion of a metal plate. Spoon passes the long hours in bed trading war stories with his fellow patients and recounts his complicity as a witness to a brutal crime of war in Ramadi, and his coercion in a cover-up when threatened by a private contractor who goes by the nickname Skank. When the wounded Skank appears at the hospital, he bluntly threatens Spoon to keep his mouth shut about Ramadi. One by one, Spoon's friends on the ward begin dying in mysterious ways, and he knows he must defeat Skank or die himself. This powerful, heartbreaking novel about the aftermath of war creates a vivid world populated by odd characters who struggle with being outcasts and victims. The young narrator mingles his quirky slang about the war with eloquent and often lyrical emotion.

Tom Maremaa is a journalist whose writing has appeared in a broad range of publications, including The New York Times Magazine and Rolling Stone. He has done extensive research into the lives of soldiers coming home from the Iraq War and has traveled extensively in the Middle East.

*Starred Review* The most tragic and enduring legacy of the Iraq War may be the thousands of vets suffering traumatic brain injury (TBI). Metal Heads is a moving and deeply unsettling novel of a hospital full of such vets in California. The book’s narrator, Marine Lance Corporal Jeremy “Spoon” Witherspoon, is typical: he’s lost an eye and a hand and has a steel plate in his head. He’s dosed with an ever-changing cocktail of drugs and may or may not have a steady grasp of reality. He describes a hospital surrounded by razor wire, filled with video-surveillance cameras, and policed by private contractors. Few of the patients have any family, loved ones, or even visitors. Spoon hints that patients are being experimented on and believes they’ll soon be coming for him. At the same time, he fears the hospital will be closed for lack of funds, and he will be homeless. When he and fellow patients ask when they will be released, they are told, “Don’t even think about it,” which they translate into the word unthinkable, which, in turn, becomes their ironic mantra, the Catch-22 for a new generation of warriors. The heart of this dark, Kafkaesque tale lies in uncertainty. TBI, like war, wreaks havoc on the brain, and Maremaa’s characters may all be delusional. Or not. A powerful and heartbreaking novel. --Thomas Gaughan