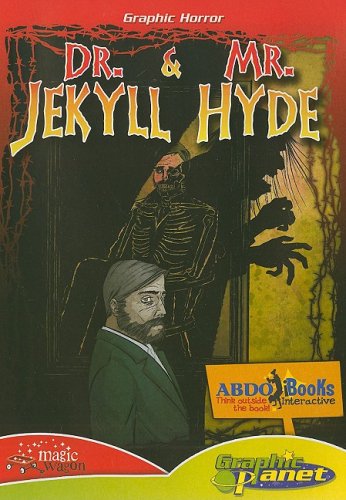 (back cover)
We all have a good and a bad side. But just suppose you could separate them into two different people--one good, one entirely evil?

The famous chiller by the author of TREASURE ISLAND is vividly and faithfully retold in graphic novel format.

"My devil had been long caged,
he came out roaring."

Andrzej Klimowski studied at Saint Martins School of Art in London, and at the Warsaw Academy of Fine Arts. He has designed posters for theaters, film distributors in Poland, and book covers and illustrations for publishers in the United Kingdom. His own graphic novels include The Depository, The Secret and Horace Dorlan. Klimowski is professor of illustration at the Royal College of Art, London, England.

Danusia Schejbal was born in London. After studying Fashion and Textiles at the Ealing School of Art, she earned a postgraduate degree in stage design at the Warsaw Academy of Fine Arts. She worked for major theaters in Poland before returning to the United Kingdom where she worked for the Fringe Theater. Since then she has been working as a painter exhibiting in the UK and Europe. Dr. Jekyll and Mr. Hyde is the second book that Schejbal has collaborated on with Andrzej Klimowski, after The Master and Margarita.