Items related to The Holocaust: An End to Innocence

Seymour Rossel The Holocaust: An End to Innocence

The Holocaust: An End to Innocence 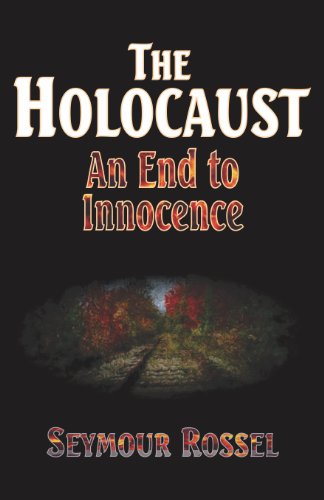 How did it happen? Why did we allow it to happen? Could it happen again? These are the three questions most often asked about the Holocaust, the whirlwind of murder during which the Nazi-led government of the Third Reich systematically slaughtered 6 million Jews, along with millions of victims from other targeted populations Gypsies, Slavs, the mentally retarded, the insane, homosexuals, and the physically deformed. In , Rossel examines the Nazi rise to power, the role of prejudice and propaganda in the Holocaust, and echoes of the Holocaust that plagued the world before, during, and after the Nazi period and continue to plague us to this day. The Holocaust, he maintains, did not happen to the Jews alone. It is a tragedy that exposed the depths of evil we human beings are capable of visiting upon one another. Yet, the book is not without hope. As philosopher George Santayana wrote, we must know what happened for those who cannot remember the past are condemned to repeat it. At the very least, understanding the Holocaust enables us to recognize when blowing winds of prejudice threaten to become tornados and hurricanes to sweep away the innocent. For, as Rossel states in the Foreword, every echo of the Holocaust offers us the opportunity to rise above the worst that is in us and to exercise the best that is in us.

Rabbi Seymour Rossel is the author of The Essential Jewish Stories, The Wise Folk of Chelm; The Torah: Portion-by-Portion, Bible Dreams; A Child’s Bible, and many other books.

For many years, he sat on the national boards of the Jewish Book Council, the Coalition for the Advancement of Jewish Education, and the National Association of Temple Educators (now the Association of Reform Jewish Educators). In 1988 and again in 1996, Rabbi Rossel was Chairperson of international conferences on Jewish education convened at the Hebrew University in Jerusalem.

As speaker, author, and editor, Rabbi Rossel is listed in Who’s Who in the Eastern States, Contemporary Authors, and Who’s Who in World Jewry. He holds several awards for excellence in Jewish Education and was honored by being inducted as an exofficio member of the Central Conference of American Rabbis.

Rabbi Rossel lectures widely on Jewish legend and lore, Bible, archaeology, mysticism, Jewish history, education, and values; and offers scholar-in-residence engagements, congregational and educational workshops; and retreats in communities throughout North America. His books, workshops, and articles are featured on the web at http://www.Rossel,net.

Seymour Rossel, a long-experienced and gifted educator, here gives yet another important contribution for readers of every age and background. This book is a rare and valuable overview of an enormously challenging subject. Every chapter is accessible, intelligent, and compelling. --David Altshuler, PhD, Founding Director, Museum of Jewish Heritage

1. The Holocaust: An End to Innocence

2. The Holocaust : An End to Innocence

Book Description Ktav Publishing House, Incorporated. Paperback. Condition: As New. An apparently unread copy in perfect condition. Dust cover is intact; pages are clean and are not marred by notes or folds of any kind. At ThriftBooks, our motto is: Read More, Spend Less. Seller Inventory # G1602802033I2N00

3. The Holocaust: An End to Innocence

Book Description KTAV Publishing House, 2012. Condition: Good. A+ Customer service! Satisfaction Guaranteed! Book is in Used-Good condition. Pages and cover are clean and intact. Used items may not include supplementary materials such as CDs or access codes. May show signs of minor shelf wear and contain limited notes and highlighting. Seller Inventory # 1602802033-2-4

4. The Holocaust: An End to Innocence